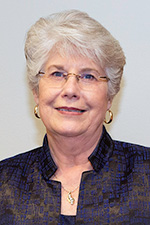 Beyond her administrative duties in the office and her legislative duties on the floor, the Secretary must satisfy the demands of her electorate, the 31 members of the Senate.

She must answer queries from citizens and groups from throughout the state and the nation and participate in ceremonial and social occasions as a representative of the Senate.

During the interim, the Secretary of the Senate's Office serves as a general administrative office, information and announcement center, clearinghouse for staff functions, and coordinator of staff development and training programs.