Welcome to the official website for the
Texas Senate
Senator Nathan Johnson: District 16 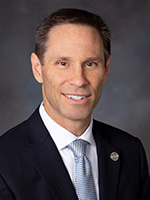 Johnson played a key role in the 87th Legislature’s responses to winter storm Uri, including legislation to stabilize the state's energy markets and avoid future catastrophic failures of the power grid. His work in preserving patients' rights helped bring full bipartisan support to the COVID-19 liability law. Johnson is a sought-after speaker on the economic and social aspects of Medicaid expansion.

As a member of the Senate Committees on Business & Commerce, Water, and Jurisprudence, Johnson works on policy areas that are critical to the state, including electrical power, insurance, banking, technology and telecommunications, water rights, environmental quality, and state legal systems. Johnson also was appointed to the Texas Sunset Advisory Commission, a panel of lawmakers and private citizen appointees, charged with reviewing and proposing changes to state agencies to ensure that they effectively and efficiently serve the needs of the public.

Johnson holds degrees in physics from the University of Arizona and law from the University of Texas at Austin. He practices law in Dallas in the Trial Practice Group at Holland & Knight, and previously composed music for the classical concert stage and scored the hit television series Dragon Ball Z. Senator Johnson and his wife Anne, a Dallas appellate attorney, have three children in college and high school.