(AUSTIN)—The heroism of Lance Corporal (LCpl) David Lee Espinoza was honored at a Legislative Tribute on Memorial Day at his family home in Laredo’s Cielito Lindo. Hosted by his mother, Elizabeth Holguin, the celebration of his legacy memorialized the Texas Legislature’s expression of admiration, respect and gratitude for his patriotism and devotion to our country.

Senator Judith Zaffirini, D-Laredo, and State Representative Tracy O. King, D-Uvalde, presented resolutions adopted unanimously by the Texas Senate and House of Representatives during the Special Legislative Session that was underway when LCpl Espinoza lost his life in a terrorist bombing during the evacuation of American troops from Afghanistan in August, 2021.

"Only 20 years old, LCpl Espinoza sacrificed his life helping American citizens and our Afghan allies," Senator Zaffirini said. "He is a true hero." Thirteen U.S. servicemembers and 170 Afghan civilians were killed in the attack.

"Memorial Day reminds us to express our gratitude to those who selflessly gave their lives for our opportunity to be free," said Representative King. "I want to thank the Espinoza family for allowing us the opportunity to participate in a ceremony honoring their son."

The resolutions express the legislature's deepest condolences, celebrate LCpl Espinoza's character and life and signify our enduring gratitude for his service. Every state legislator requested to co-author the resolutions, underscoring their importance. Only 18 when he joined the Marines immediately after his graduation from LBJ High School in Laredo, LCpl Espinoza was stationed in Jordan for two years and was transferred to Kabul only a week before he died. He had dreamed of joining the military since childhood.

"LCpl Espinoza's legacy remains alive in all of us who honor his sacrifice," Senator Zaffirini said. "His courageous service will forever be a source of pride not only to those who knew and loved him, but to Americans throughout the country."

Senator Zaffirini also presented a flag flown over the Texas State Capitol in his honor on August 28, the day of his vigil, an Ann Hand Veterans Pin, and a coin from Senator Brian Birdwell, R-Granbury, who served in the U.S. Army for 20 years and in the Pentagon during 9/11. 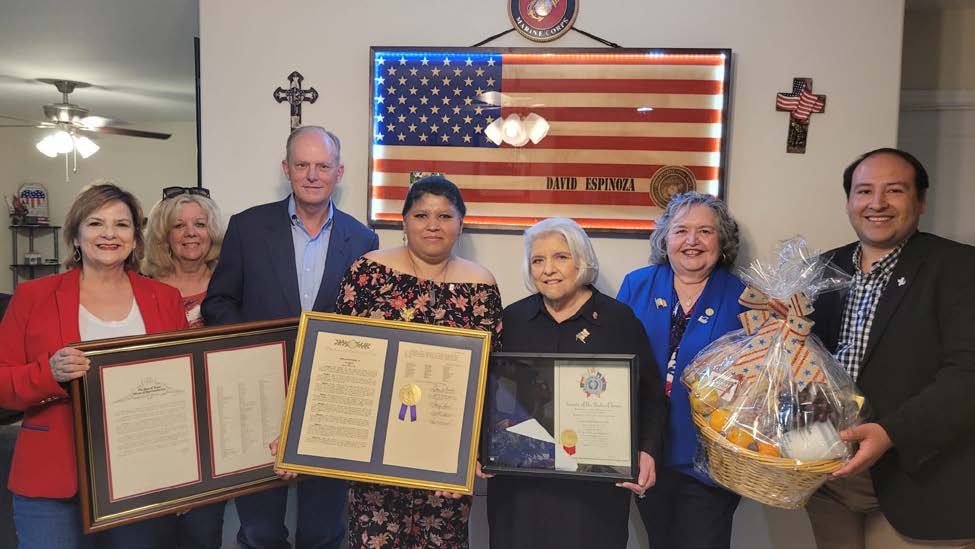