(AUSTIN)—Senator Judith Zaffirini, D-Laredo, and Representative Jeff Leach, R- Plano, introduced legislation that would allow student-athletes at Texas universities to earn compensation and benefit, if they choose, from their own names, images, and likenesses (NIL). The bills, filed Feb. 11 as Senate Bill 660 and House Bill 1891 in their respective chambers, would make Texas the seventh state to permit NIL agreements.

"Texans, myself included, love college sports," Senator Zaffirini said. "Part of that love means recognizing that it currently is not a fair deal for student-athletes. Rep. Leach, our fellow co-authors and co-sponsors, and I are delighted to offer this bipartisan solution that preserves the separation between amateur and professional competition while allowing our athletes to be compensated based on their talents."

"I believe it is of critical importance that Texas universities allow students to benefit from the use of their own name, image, or likeness," Rep. Leach added. "This is an issue of right and wrong. While we do not support directly paying or compensating student athletes, any policies that prevent or stand in the way of our student athletes utilizing their gifts to better themselves and improve their lives are by their very nature un-Texan. I am proud to work alongside Senator Zaffirini on this issue."

The two bills would authorize NIL agreements and allow student-athletes to seek professional representation exclusively for them. The bill also would establish a set of basic guidelines for NIL deals. They would not, for example, be allowed to conflict with existing university agreements, nor could they be extended beyond a student-athlete's NCAA eligibility.

Interestingly, unlike most legislation introduced in the Texas Legislature, the bills declare that "the United States Congress must act on this matter to ensure the competitive integrity of intercollegiate athletics," alluding to concerns that 50 separate state laws would create confusion or a "pay to play" atmosphere. Rep. Leach said the need for federal action made his and Senator Zaffirini's legislation more important. "Congress will have the final say, but they're never likely to act with urgency," he said. "Texas should do what it does best: lead."

Ensuring the competitive integrity of college sports is among Zaffirini and Leach's highest priorities in this effort. The bills explicitly prohibit universities from soliciting prospective student-athletes based on NIL deals or the potential for NIL deals, and compensation would be limited to fair market value to avoid unreasonably high payments being used for recruiting purposes. The bill does not authorize or allow the direct compensation of student-athletes from Universities.

Balancing the many competing interests involved to develop the legislation required working closely with the state's public and private universities. "I appreciate the willing cooperation of our university partners and, most especially, their commitment to improving the lives of their student-athletes," Senator Zaffirini said.

The bills should be referred to their respective committees in the coming weeks, and legislators may amend them in the process. Persons interested in expressing their opinions about this or any other legislation are encouraged to contact their local senator and representative. 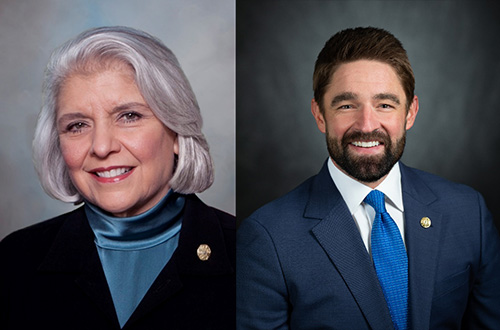 SENATOR JUDITH ZAFFIRINI (D-Laredo) AND REPRESENTATIVE JEFF LEACH (R-Plano) jointly filed legislation on Feb. 11 that would allow student- athletes at Texas universities to receive compensation for their names, images, and likenesses. Texas would be the seventh state to enact such a policy.