This session will be unlike any before it. Because of COVID-19 restrictions, the typically lengthy and crowded opening-day ceremony was abbreviated and only lightly attended by senators' family members. What's more, the usual calendar of luncheons, receptions and other celebrations was largely cancelled.

The senator is not deterred by the uncertainty of the coming 140 days, however. "Despite the new challenges we will surely face, I look forward to collaborating with my colleagues to meaningfully improve Texans' lives by focusing on pandemic recovery, strengthening our public schools and improving access to affordable health care," she said.

Senator Zaffirini has pre-filed 42 legislative measures (39 bills and 3 joint resolutions) reflecting her priorities and is developing others. Her legislation would expand Medicaid, provide student loan debt assistance to frontline workers, expand access to pre-kindergarten for 3-year-olds and make higher education and community colleges tuition-free for persons with an annual household income of less than $100,000.

Legislators this session also will address a sizable budget deficit. At Monday's Biennial Revenue Estimate briefing, Comptroller Glenn Hegar estimated a $1 billion shortfall for the current biennium and slightly less available revenue for the coming two years. "Deficits are never a good thing, but the comptroller's estimates were better than expected," Senator Zaffirini said. "I am confident we will be able to avoid potentially devastating cuts to education, higher education and health and human services."

Redistricting also will be a much-discussed topic. Once legislators receive data from the U.S. Census Bureau, they will conduct their once-per-decade redrawing of Texas House, Senate, Congressional and State Board of Education maps. "Redistricting is among our most important tasks as legislators," the senator said. "I look forward to a fair and transparent process that I hope will prioritize community interests rather than partisan advantage."

Senator Zaffirini and her staff are accepting appointments via Zoom. They may be reached at her Capitol office, 512/463-0121, or at her Laredo office, 956/722-2293, respectively, or by email via judith.zaffirini@senate.texas.gov. 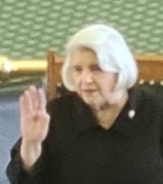 SENATOR JUDITH ZAFFIRINI, the second-highest ranking member and highest- ranking woman and Hispanic member of the Texas Senate, was sworn in today to represent Senate District 21 during the 87th Legislative Session.