At the recent hearing of the Senate Select Committee on Transportation Funding, Senator Tommy Williams, R-The Woodlands, chair, directed the Texas Department of Transportation (TxDOT) to request the funding for 70 projects that had not been funded in the appropriations bill. On Oct. 9 the agency made the request to the Legislative Budget Board (LBB), which must approve it.

A member of the LBB and of the Senate Finance and Select Transportation Funding Committees and Chair of the Senate Government Organization Committee, Senator Zaffirini said funds "are long overdue and will not only improve safety on our overburdened roadways, but also will support our vital agriculture and energy industries."

The repairs are necessary because of the extremely high volume of oil and gas industry truck traffic in Senate District 21, which includes the majority of rigs, the majority of production and the top-producing counties in the Eagle Ford Shale.

Despite the fact that oil and gas development in the Eagle Ford Shale contributed more than $1.24 billion in state revenue in 2012 alone, TxDOT has proposed converting some paved state highways in the shale region to unpaved roads.

Senator Zaffirini, concerned about the plan's impact on the safety and prosperity of rural Texans, has championed seeking alternative solutions. The Eagle Ford Shale Legislative Caucus, of which she is an organizer, hosted a town hall meeting in Cotulla on Sept. 10 for citizens to ask questions of TxDOT officials about the proposal.

"Many of us were concerned that TxDOT would convert more paved roads to unpaved roads immediately," Senator Zaffirini said. "At our transportation funding hearing, however, Phil Wilson, director, said the agency would collaborate with local officials and legislators before proceeding.

A list of all 109 state highway projects funded this year is attached. 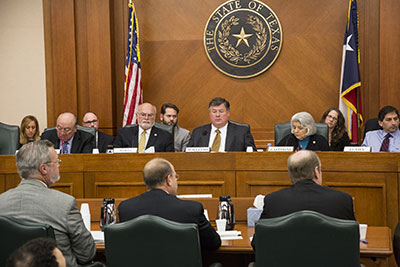