Welcome to the official website for the
Texas Senate
Senator Juan "Chuy" Hinojosa: District 20
« Return to the home page for Senator Hinojosa
printer-friendly

Austin, TX – The American Council of Engineering Companies of Texas (ACEC Texas) presented Senator Juan “Chuy” Hinojosa (D-McAllen) with the Champion of Infrastructure Award for his work on behalf of Texas engineering firms during the 2021 Texas Legislative Session.

The Champion of Infrastructure Award recognizes elected officials who support the engineering community by promoting policies that encourage infrastructure development and create a fair, business-friendly environment in the State of Texas. The award recipients are chosen by the members of the ACEC Texas Public Policy Council (PPC).

Senator Hinojosa worked with ACEC Texas and several stakeholders in the design and construction industry to pass legislation that would uphold our laws on the appropriateness of energy savings performance contracts (ESPC) and remove unintended loopholes in procurement statutes to protect the public.

“Prior to the legislative session, there were instances of ESPCs being used in ways outside their original intended purpose, which unfairly altered the public procurement process,” stated ACEC Texas President Peyton McKnight. “Senator Hinojosa recognized this problem and worked with stakeholders to pass legislation that would enforce EPSC laws as originally intended and close loopholes to prohibit abuse of these contracts.”

"I’m honored to receive the Champion of Infrastructure Award from the American Council of Engineering Companies of Texas," said Senator Hinojosa. "Our engineers play a key role in building infrastructure, creating jobs, and growing our economy and our state. I look forward to continue working with ACEC Texas and supporting legislation that protects taxpayers and keeps Texas strong."

ACEC Texas is the business association of Texas engineering firms. The organization is committed to advancing the private practice of consulting engineering, enhancing markets for private engineering services, educating the public on the importance of infrastructure investment, and promoting sound business practices within the industry and its client base. 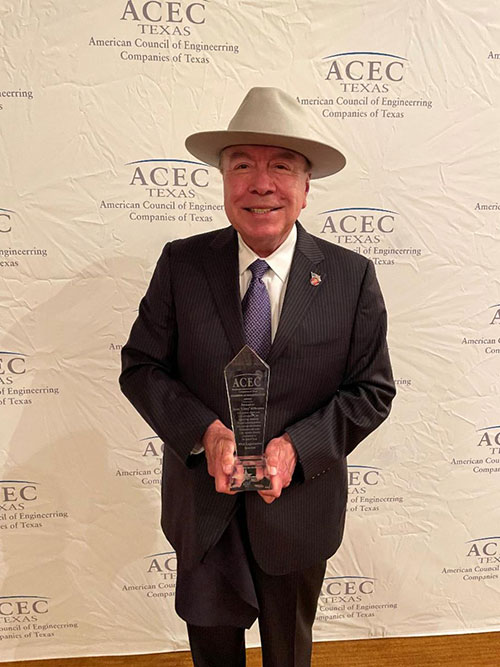