Welcome to the official website for the
Texas Senate
Senator Juan "Chuy" Hinojosa: District 20
« Return to the home page for Senator Hinojosa
printer-friendly

AUSTIN, TX — On Monday, October 18, the Texas Press Association presented Senator Juan "Chuy" Hinojosa with the "Champion of Transparency" award for his record of supporting the Texas Public Information Act and legislation that improves legal notice requirements of government activities during the 87th Regular Legislative Session. Senator Hinojosa was a joint-author of SB 1642 (87R), which updates the public notice requirements and the proposal procedures for navigation districts.

Senator Hinojosa has authored and supported open government legislation throughout his career. This past regular session, he supported SB 1225 (87R), which clarified existing law around how governmental agencies can use the “catastrophe notice” provision of the Texas Public Information Act (TPIA). Concerns were raised that some governmental bodies abused temporary suspension of responding to requests during the COVID-19 pandemic, which was not consistent with the intent of TPIA.

In addition, Senator Hinojosa supported other measures that promoted transparency including HB 1322 (87R) and HB 1154 (87R). HB 1322 requires state agencies to publish brief summaries of proposed rules on their websites. HB 1154 aims to increase transparency of special purpose districts by requiring them to post on a website specified financial and operating information of the district. Senator Hinojosa has a long record of supporting transparency and open government as the public has the right to know what the government is doing with their tax dollars.

In response to receiving the award, Senator Hinojosa issued the following statement:

"I appreciate the Texas Press Association presenting me with the "Champion of Transparency" award. I look forward to continue working with TPA on measures that would strengthen the public's access to information and provide additional transparency into the way our government works. The access to information assists voters to hold government officials accountable. It is important that Texans can remain informed on the administration of government at all levels." 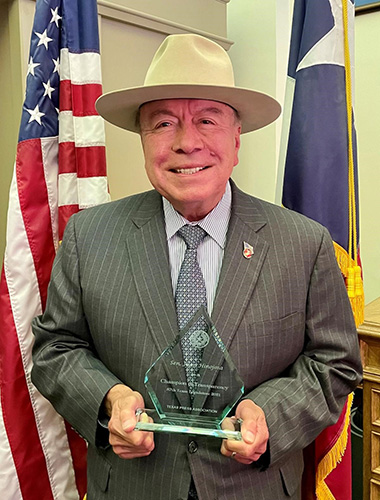