(AUSTIN) — The Senate Finance Committee approved a measure on Monday that would allocate $1.8 billion in state funds to beef up border security. The bill would dedicate $750 million to build walls, barriers, and temporary fences along the Texas-Mexico border. For three decades, at least, the federal government has failed to stop the flow of migrants, drugs, and criminals across the Texas-Mexico border, said DPS Director Steve McCraw, and that the consequences of an unsecured border reach across the nation. "This is a federal, bipartisan failure," he said. "Drug trafficking organizations in Mexico… evolved or transformed into the most significant, violent, ruthless and powerful organized crime groups in the world. If you have a cocaine problem in New York City, you have a Mexican cartel problem and a border problem." 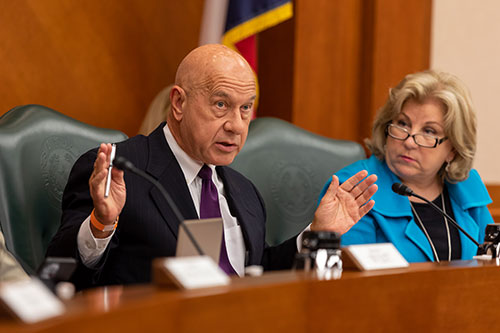 Senator John Whitmire of Houston told members that criminals and drugs that come through the border affect every corner of the state, especially major urban centers.

McCraw told members that the numbers of illegal border crossings this year is like nothing anyone has ever seen. With a month left to go in the current federal fiscal year, the state has reported more than a million border apprehensions this year, surpassing the previous record of 750,000 set in 1986. In response, Governor Greg Abbott began Operation Lone Star in March, surging state law enforcement and state national guard personnel to the border. Those caught can be arrested on state trespassing charges and housed in certain Texas state prisons before they are handed over to federal immigration authorities. The money approved by Senate Finance on Monday looks to enhance those efforts. In addition to wall funding, the bill would allot $300 million to increase National Guard forces along the border by 1,800 troops and would allocate $100 million to pay for overtime and equipment for additional DPS troopers. It also includes $100 million in direct assistance grants to local law enforcement along the Rio Grande.

McCraw told members that the state is planning to build 733 miles of walls, fences, and other barriers covering more than half of the 1200 mile border. Fences are being erected on state land as well as private property, but only at the owner's consent. "If that landowner does not want it there, the state is not going to use the power of eminent domain to install either the temporary fence or the wall," said Sarah Hicks, a senior advisor for the Office of the Governor. Hicks said that the fences serve a number of purposes; besides acting as a direct barrier to entry, the fences funnel those trying to cross the border illegally to areas that are easier for law enforcement to patrol, and they serve as a notice to migrants when they are trespassing on private property. The state national guard has joined the construction efforts and the focus right now, according to state adjutant general Maj. Gen. Tracy Norris, is putting up fences in high traffic areas. It's not clear when construction on permanent barriers will begin, with the state still working through the bureaucratic processes necessary to design, implement and manage such a large project.

Houston Senator John Whitmire told his colleagues that while the focus seems to be overwhelmingly on border security, the effects are spread across the state - and public safety dollars need to be likewise spread across the state. "Those drugs and human trafficking victims, they're not staying at the border," he said. "I'm talking about armed robbers, rapists and murders – Senator, they're in your city and it's being directed by the cartel on the other side." Whitmire said that as we put resources towards the border, the state must also direct resources to combat crime surges in urban centers. "Don't anybody kid themselves that we don't have a state urban crime wave that needs state resources," he said.