Welcome to the official website for the
Texas Senate
Senator Charles Schwertner: District 5 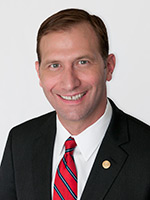 Senator Charles Schwertner is a physician, family man, business owner, and a life-long fiscal and social conservative. In 2010, Schwertner was first elected to serve the people of House District 20 as a member of the Texas House of Representatives. There, he quickly earned a reputation as a measured and effective legislator, working with his colleagues to pass one of the most conservative legislative agendas in Texas history.

In 2012, Schwertner won the Republican Primary for the Texas Senate (District 5) with nearly 75 percent of the vote. Senate District 5 is a ten-county region of Central and East Texas that includes Brazos, Freestone, Grimes, Leon, Limestone, Madison, Milam, Robertson, Walker and Williamson Counties.

Throughout his time in the Texas Senate, Senator Schwertner has fought for the families in his district by supporting retired teachers, working to make higher education more affordable, and protecting children from abuse and neglect by reforming the Department of Family and Protective Services. Schwertner also worked to reform the energy industry, including the PUC and ERCOT boards following Winter Storm Uri. Schwertner has also worked to protect our seniors by authoring legislation to improve nursing homes and punish bad actors in the industry. In the Senate, Dr. Schwertner serves as the Chair of the Senate Committee on Business and Commerce and the Special Committee on Constitutional Issues, as well as serving on the Senate Committees on Education, Finance, and State Affairs.

Charles comes from a prominent farming and ranching family that has called Texas home for six generations. In addition to his role in the Texas Legislature, Dr. Schwertner also works as a practicing orthopedic surgeon, treating thousands of patients each year. He and his wife Belinda (an obstetrician/gynecologist and current law student) reside in Georgetown. They have three sons: Carson, Zachary, and Matthew, who are all in college.