(AUSTIN) — Senator Judith Zaffirini, D-Laredo, won the 2020 Ann Faragher Sweepstakes Award, the Press Women of Texas' (PWT) highest distinction during its annual communications contest. Named for the trailblazing journalist who became one of the first women to serve as editor of a daily newspaper in Texas, it is given to the contest participant who earns the most first-place entries. This is Senator Zaffirini's thirteenth time receiving the award.

"Communication is an essential part of what I do as an elected official and a businessperson," Senator Zaffirini said. "Earning such recognition from my peers is incredibly meaningful, and it validates the care and attention I always give when interacting with my constituents."

In all, the senator received 23 awards in this year's contest across a range of categories: 12 first place, six second place and five third place. The first-place entries all advanced to a national competition held by the National Federation of Press Women, in which nine received second place, third place or honorable mention distinctions.

One such winner was Senator Zaffirini's speech at the unveiling of a plaque honoring Ramiro "Ray" Martínez, the law enforcement officer whose actions ended The University of Texas at Austin tower shooting in 1967. The senator, who was on campus during the shooting, recounted vivid memories during her address: "To this day I remember not only the sounds of the gunfire, but also the sounds and sights of the suffering and the actions of heroes," she said.

In three categories—speeches, press releases and single-issue advertisements—Senator Zaffirini completed a "sweep," winning all three top prizes. Her annual newsletter, Senator Judith Zaffirini Reports to the Families of Senate District 21, also earned several accolades for article and headline writing, editing, presentation and graphic design. The next edition will be published this summer.

Second in seniority in the Texas Senate, Senator Zaffirini has received more than 1,100 awards for her professional and public service work, including nearly 400 for communication. She holds Bachelor of Science, Master of Arts and PhD degrees in communication from The University of Texas at Austin, where she worked at The Daily Texan as a reporter, feature writer, copy editor, headline writer, assistant editor and special issue editor. The university and its Moody College of Communication named her a Distinguished Alumna in 2003 and 2016, respectively, and she was inducted to the Texas Women's Hall of Fame by Governor Greg Abbott in 2019. 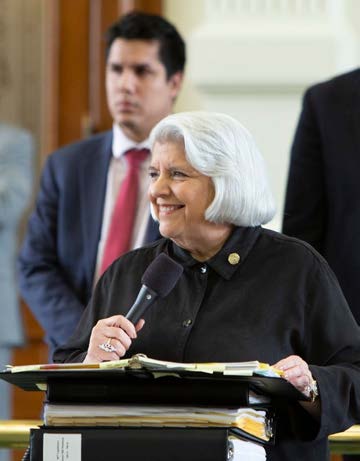 SENATOR JUDITH ZAFFIRINI celebrates the passage of one of her bills in the Texas Senate. The second-highest ranking senator, she also is an award-winning public servant, communicator and businessperson.