Senator Zaffirini's Senate Bill (SB) 54 requires a study regarding the appropriate methods and standards for evaluating certain students participating in regional day school programs for the deaf. Her SB 1524, which passed as House Bill (HB) 448, would have required children under two to sit in rear-facing car seats, with certain exceptions, but, unfortunately, was vetoed. Senator Zaffirini also sponsored and passed HB 1869, with Rep. Stephanie Klick (R-Fort Worth), relating to the composition of the Governor's EMS and Trauma Advisory Council.

"I am delighted to receive this award from the Texas Nurses Association," Senator Zaffirini said. "Its support and rigorous advocacy for public health is critical for passing legislation."

Preparation for the legislative session that begins in 2021 is underway, and Senator Zaffirini encourages advocates to begin working with her now to enhance their future success. "My staff and I already are working with stakeholders to re-file worthy bills that failed and to develop new legislation. We welcome suggestions and collaboration, especially from constituents, whose feedback has resulted in some of my best legislation." 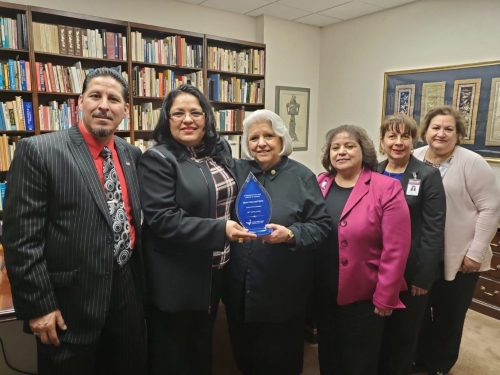 SENATOR JUDITH ZAFFIRINI, D-LAREDO, receives the Legislative Champion Award from (L-R) Reverend Evaristo Escamilla, Sandra Lylia Garza-Escamilla, Irene Rosales, Carol A. Gunnoe and Rose A. Saldivar on behalf of the Texas Nurses Association. A tireless advocate for her constituents in Senate District 21, she prioritizes access to quality health care and education for the very young, the very old, the very poor, persons with disabilities and veterans.