To celebrate the remarkable milestone, the Lt. Governor Dan Patrick, R-Houston, presented her with the commemorative gavel that he used as she cast that significant vote.

"My constituents elected me to be their voice and to vote on their behalf in the Texas Senate, which is why I take voting so seriously," Senator Zaffirini said. "Accordingly, I cast every vote by balancing the needs and interests of Senate District 21 families with those of our great state."

Known for her work ethic and her deep commitment to constituent service, Senator Zaffirini has been recognized repeatedly as one of the best and hardest-working legislators. In 1997 State Legislatures magazine highlighted her 15,000th consecutive vote in an article titled, "15,000 and Still Counting: The Tireless Texan." No one responded to the magazine's request for information about similar records in any other state. When she approached 30,000 consecutive votes in 2003, The Alcalde, the official alumni magazine of The University of Texas at Austin, called her the "Cal Ripken of the Texas Legislature."

Senator Zaffirini's legendary work ethic also is reflected in her 100 percent perfect attendance in the Texas Senate since 1987, except for breaking quorum deliberately in 2003 to prevent an untimely redistricting that the U.S. Supreme Court ruled (2006) violated the Voting Rights Act and disenfranchised voters in her Senatorial District 21.

She has passed more bills than any other legislator in the history of the State of Texas, having sponsored and passed 1,024 bills and 53 substantive resolutions Showing her bipartisan effectiveness, in the 2017 Republican-dominated Texas Legislature she passed 108 bills, breaking her record of 102 and passing more bills than any other legislator for the second consecutive legislative session. In naming her among its "Best of the Legislature" for 2017, the online news service, Capitol Inside, noted that Senator Zaffirini "reaffirmed her distinction this year as the hardest-working lawmaker in Texas in three decades at least."

"Every bill I vote on is important, because every bill matters to someone," Senator Zaffirini said. "I am grateful for the opportunity to continue to make a difference in the lives of Texans, especially the very young, the very old, the very poor, persons with disabilities and veterans."

The first Mexican American woman to be elected to the Texas Senate, to serve as President Pro Tempore of the Senate, and to serve as Governor for a Day, Senator Zaffirini also is the second highest-ranking Texas senator; and the longest-serving and highest-ranking woman, Hispanic and minority senator.

Named an Honorary Nun by the Sisters of Mercy, Senator Zaffirini attributes her success in the Texas Senate partly to lessons learned from the Ursuline nuns, particularly her punctuality and reverence for decorum. To help others, particularly freshmen, master the complexities of the Senate, each session she voluntarily writes a Presiding Guide that memorializes the procedures and language for passing bills and for presiding over the Senate and Senate committees.

She also is a member of the Texas Judicial Council and of its committees on Public Trust and Confidence; Civil Justice; and Guardianship, Mental Health and Intellectual Disabilities. In the Senate she serves on its committees on Business and Commerce, Natural Resources, State Affairs and Administration.

Senator Zaffirini holds B.S., M.A. and PhD degrees from The University of Texas, which named her a Distinguished Alumna in 2003; an Outstanding Alumna of the Moody College of Communication in 2016; awarded her the Presidential Citation in 2013; and inducted her into the UT Daily Texan’s Hall of Fame in 2016.

She has been married to attorney Carlos Sr., her high school sweetheart, for 52 years. Their son, Carlos Jr., an attorney and businessman, and Audrey welcomed their first child, Asher Maxwell Zaffirini, in June! 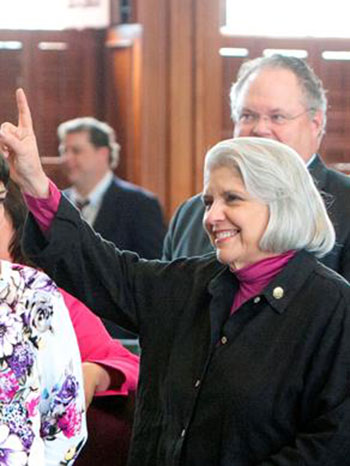