SB 42 would create the position of Director of Security and Emergency Preparedness at the Office of Court Administration, establish local court security committees, fund security training for judges and court personnel, facilitate the removal of judges' personal information from public documents and allow the Department of Public Safety to provide security for judges who are threatened or attacked.

"The implementation of these measures would improve safety for everyone who interacts with the Texas justice system, including judges, courthouse personnel, lawyers, jurors and citizens," said Senator Zaffirini, a member of TJC.

The bill is named for the Texas district judge who survived an assassination attempt at her home in November, 2015. After 27 surgeries and 39 days in the hospital, she returned to the courtroom in February, 2016.

"The attack on Judge Korcurek was not only an assault on our judicial system, but also a wake-up call to improve security for all judges and courthouses in our state," Senator Zaffirini said. "Her courage and perseverance in returning to the bench proved that criminals cannot thwart justice by threatening or intimidating Texas judges. What's more, her desire to ensure that others are not attacked and her belief in justice for all inspired her meaningful advocacy for improving court security."

In 2016 Texas Supreme Court Justice Nathan Hecht appointed a Court Security Committee at the TJC to study the issue and make recommendations. It found serious deficiencies in the state’s security posture, including a lack of court security best practices, training and funding.

SB 42 addresses the committee's findings and implements its recommendations.

"I am grateful to Chief Justice Hecht for his leadership on behalf of improved court security in our state," Senator Zaffirini said. "What's more, feedback from the Office of Court Administration and countless other judges, lawyers, law enforcement officers and citizens helped improve the legislation. Thanks to our collaboration, the Senate has passed a bill that would help make Texas safer for all who seek justice." 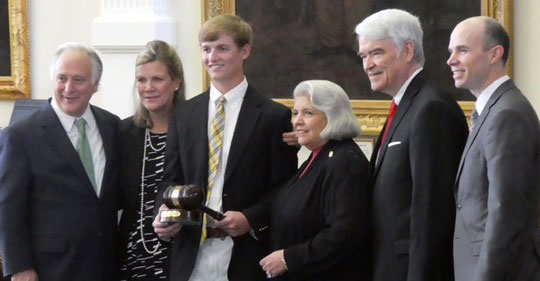