Senate Bill (SB) 965 would authorize a local election to create a water-oriented recreation district (WORD) along the portion of the San Marcos River that forms the boundary between Guadalupe and Caldwell counties, which is visited by more than 80,000 tubers and recreational users each year. The number of visitors to the river, especially for tubing, has increased substantially in recent years.

Due to a lack of law enforcement resources, however, this section of the river attracts persons who drink irresponsibly and engage in other reckless and unlawful behaviors. As a result there are frequent alcohol-related incidents on the river ranging from minor to catastrophic in nature. In 2014, for example, a 19-year-old drowned after a day of tubing and drinking alcohol with friends, and in 2016 a 21-year-old woman was charged with intoxication manslaughter after allegedly drinking while floating on the river and being involved in a car crash that killed a young husband and injured his pregnant wife, causing her to lose their unborn child.

"All Texans have the right to enjoy the river, but they should do so safely and responsibly," Senator Zaffirini said. "Reckless and unlawful behavior recently is concentrated in unincorporated areas along the river where law enforcement resources are stretched thin. Our bill would help give law enforcement the resources they need to prevent additional tragedies."

Landowners along the river face problems with excessive littering, trespassing, public intoxication, underage drinking and other drug and alcohol-related offenses. In 2015 local business owners testified before the Texas Legislature that their businesses, including campgrounds, fly fishing guides and canoe and kayak rental services, have been damaged by the unruly and lewd behavior of intoxicated persons using the river. Trash, glass and debris in the river harm water quality and can pose a danger to humans and wildlife alike.

"The San Marcos River is an ecological treasure and an economic boon for the region, but we literally are loving it to death," Senator Zaffirini said. "SB 965 is a pro-active approach to keeping this precious resource safe and beautiful so that it will continue to be enjoyable for tourists and local residents alike for generations to come."

If voters approve, the WORD would be governed by a seven-member board, with three members appointed by each county commissioner's court and one member selected by the district board from among nominations provided by each municipality included in the district. Once created, the district could levy a fee on water-oriented recreation businesses and use the revenues to fund health and safety initiatives, including law enforcement and litter abatement.

The WORD's board also would have the ability to adopt reasonable ordinances regarding litter and public safety, while preserving the public's paramount right to navigate the river. Offenses would be a Class C misdemeanor and would be enforceable by local law enforcement. Fines stemming from citations and arrests made along the river also would fund the district's public safety and litter abatement initiatives.

SB 965 is supported not only by Texas landowners, but also by recreationists, business owners, and law enforcement. Other supporters include the commissioners' courts of Caldwell, Guadalupe and Hays counties; the City of Martindale; the San Marcos River Foundation; the Texas Wildlife Association; the Texas League of Conservation Voters; the Guadalupe-Blanco River Authority; and the Meadows Center for Water and the Environment at Texas State University. 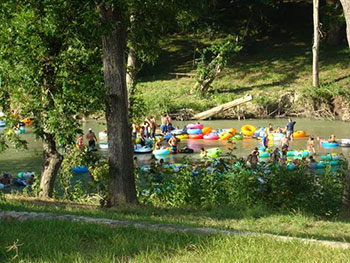