(AUSTIN) — Senator Judith Zaffirini on Tuesday was re-elected to a landmark 10th term representing District 21 in the Texas Senate.

"I truly am grateful to the voters for their support," Senator Zaffirini said. "Serving in the Texas Senate continues to afford countless opportunities to make a difference for the families of our 18 counties, namely Bee, Caldwell, Duval, Jim Hogg, Karnes, La Salle, Live Oak, McMullen, San Patricio, Starr, Webb, Wilson and Zapata; and parts of Atascosa, Bexar, Guadalupe, Hays and Travis."

Her legendary work ethic is reflected in her 100 percent voting record, having cast 55,666 consecutive votes as of 2015, and her perfect attendance in the Texas Senate since 1987, except for breaking quorum deliberately to prevent an untimely re-redistricting that the U.S. Supreme Court (2006) ruled violated the Voting Rights Act and disenfranchised voters in SD 21. She has sponsored and passed 895 bills and 52 substantive resolutions. Showing her bipartisan effectiveness, in the 2015 Republican-dominated Texas Legislature she passed 102 bills, breaking her personal record and passing more bills than any other legislator that year.

First elected in 1986 she has received more than 900 awards and honors for her legislative, public service and professional work, including more than 280 in communication.

On Monday, Nov. 14, she plans to begin pre-filing legislation for the 2017 legislative session that convenes on Jan. 10.

"I look forward to working with Lt. Gov. Dan Patrick and my Senate colleagues to pass legislation that improves quality of life for Texas families, including by enhancing public and higher education and health and human services," she said. "What's more, count on me to continue to cast every vote by balancing the needs and priorities of SD 21 with those of our great state."

A distinguished communicator, educator, businessperson, and leader, she holds B.S., M.A. and PhD degrees from UT-Austin, each with a 3.9 grade-point average. 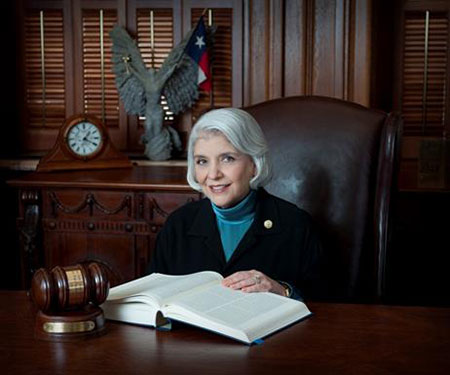 SENATOR JUDITH ZAFFIRINI was reelected to a new four-year term in the Texas Senate. Her priorities include early and higher education and health and human services, especially for the very young, the very old, the very poor and persons with disabilities.