(SAN ANTONIO) — Senator Judith Zaffirini and Bexar County District Attorney Nico LaHood were the flag bearers at Saint Mary's University School of Law's Red Mass in San Antonio, Thursday (Oct. 6). The two elected officials led the procession of judges, legislators, attorneys and law students at the 63rd annual celebration at which members of all faiths celebrate the beginning of the judicial and academic year.

The celebrant was Archbishop Gustavo García-Siller, assisted by approximately one dozen co-celebrants. Sandee Bryan Marion, chief justice of the Fourth Court of Appeals, was the welcoming speaker.

"The Red Mass is not only a beautiful, meaningful tradition, but also a wonderful opportunity to join attorneys, judges and legal scholars in requesting God's blessings and guidance for the fair, impartial administration of justice," Senator Zaffirini said. "Accordingly, I was delighted to carry the flag of our great state in the processional to the historic San Fernando Cathedral."

The tradition of Red Mass dates back more than 700 years to when European lawyers and judges attended the mass together at the beginning of each judicial session. The name "Red Mass" comes from the scarlet robes worn by judges and red vestments worn by priests in honor of the Holy Spirit.

Red Mass is now celebrated throughout the world and began in San Antonio 62 years ago when St. Mary's University joined the Catholic Lawyers Guild of San Antonio to organize the event.

"I am grateful to the St. Mary's law school and the Catholic Lawyers Guild for organizing this wonderful event and to Archbishop Gustavo Garcia and the Archdiocese of San Antonio for hosting it," Senator Zaffirini added. "It is a welcome reminder that all who are involved in the legal profession have a moral responsibility to prioritize fairness, uphold the rule of law and always seek justice. This responsibility extends not only to judges and attorneys, but also to the legislators who write our laws and the peace officers who enforce them."

Senator Zaffirini, D-Laredo, represents part of Bexar County and is a member of Blessed Sacrament Catholic Church in Laredo. 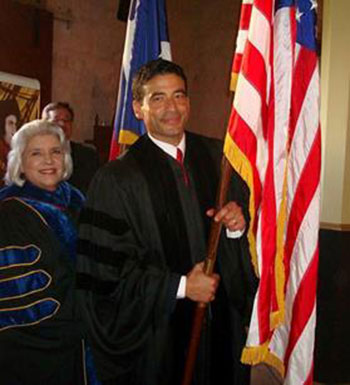 SENATOR JUDITH ZAFFIRINI and Bexar County District Attorney Nico LaHood were the flag bearers at the 63rd annual Red Mass in San Antonio, Thursday (Oct. 6). The beautiful, solemn event is organized by St. Mary's University School of Law and the Catholic Lawyers Guild of San Antonio and hosted by the Archdiocese of San Antonio.