The Hispanic Alliance is a nonprofit organization that creates and supports innovative programs that empower Austin communities through quality education, access to the arts and other resources. Its signature programs are Austin Soundwaves, which provides high-quality music education to underserved youth; Emprendedor U, which offers business classes to Spanish speakers looking to start or grow a business in Central Texas; and OLEH (Organización de Líderes Empresarias Hispanas), which offers free entrepreneurship and personal development education to Hispanic women.

"I am grateful to the Hispanic Alliance for this meaningful award and am delighted that it is now named for my friend and 'sister by choice,' Terry Long, who certainly is a legend in her own time," said Senator Zaffirini, the first Hispanic woman elected to the Texas Senate, the second highest-ranking senator and the highest-ranking woman and Hispanic senator.

"As a Laredoan whose district of 800,000 persons stretches from the Rio Grande to the Colorado River and to the Valley, the Port of Corpus Christi, and Bexar County, I proudly represent 140,000 persons in southeast Austin," she added. "To be honored as a South Texan for having a local impact in Central Texas, 240 miles away from home, makes this award even more special."

A longtime champion for the fine and performing arts, Senator Zaffirini has been honored by the Texas Commission on the Arts and holds an Honorary Doctor of Music degree from the Laredo Philharmonic Orchestra. An avid reader and writer, she has worked tirelessly to secure funding for Texas libraries, including by securing $2 million in 2007 and $4.9 million in 2009 for Lone Star Library grants and Texas Library System programs. Honored repeatedly by the Texas Library Association, she also was named a Star in Literacy by the Literacy Volunteers of America.

She has received more than 900 awards and honors recognizing her legislative, public service and professional work, especially for her zealous and relentless advocacy on behalf of the Hispanic community, including the Joe R. and Teresa Lozano Long Legacy Award from The University of Texas at Austin, the Hope Andrade Legacy Award from the San Antonio Hispanic Chamber of Commerce and the Latina Trailblazer Award from the Hispanic Women's Network of Texas. She also was named one of the 100 Most Influential Hispanics by Hispanic Business Magazine and has been recognized by the American Civil Liberties Union and the League of United Latin American Citizens.

The senator holds B.S., M.A. and PhD degrees in communication from UT, which named her the 2016 Outstanding Communication Alumna, 2013 Presidential Citation recipient, 2009 Distinguished Hispanic Alumna and 2003 UT Distinguished Alumna. Also on Friday, she was inducted into the Hall of Fame for The Daily Texan, UT's award-winning student newspaper.

Reflecting her passion for higher education, her son, Carlos Zaffirini Jr., endowed scholarships in her honor at The University of Texas at Austin and Baylor College of Medicine. The Beaumont Foundation endowed a scholarship honoring her and Carlos Sr. at Texas A&M International University, where the annual Senator Judith Zaffirini Medal is presented to faculty and students who excel in scholarship and leadership. 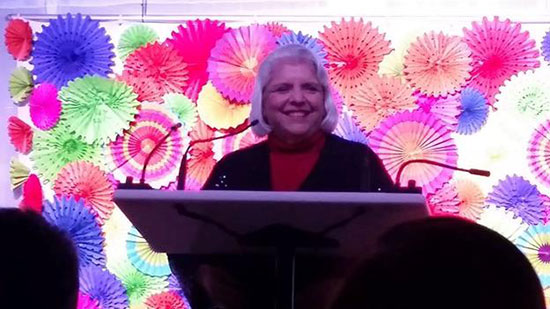 SENATOR JUDITH ZAFFIRINI, D-LAREDO, accepts the Dr. Teresa Lozano Long Trailblazer Award from the Hispanic Alliance. The first Hispanic woman elected to the Texas Senate, she champions education, the arts and economic opportunity not only in Central Texas, but also throughout the state.