(AUSTIN) — Senator Judith Zaffirini, D-Laredo, is one of six 2016 inductees into The Daily Texan Hall of Fame, the non-profit Friends of The Daily Texan announced recently. The organization was established in 2013 to support quality journalism and a strong future for the student newspaper of The University of Texas at Austin.

While a UT undergraduate, Senator Zaffirini served as a reporter, feature writer, copy editor, headline writer, assistant editor and special issue editor for The Daily Texan. The owner of Zaffirini Communications, she began her journalism career as a weekly columnist for the Laredo Morning Times when she was a high school student and, later, a UT student.

"This award is especially meaningful to me because working for The Daily Texan was an amazing experience that strengthened my resolve to pursue a career in communication and public service," Senator Zaffirini said. "What's more, I am grateful to the Friends of The Daily Texan not only for this honor, but also for their work to promote quality journalism and to ensure the success of The Daily Texan in the digital world. I share their belief in the power of student journalism, and, equally important, their commitment to freedom of speech and freedom of the press."

The awards ceremony will take place on Friday, Sept. 16. The other 2016 Hall of Fame inductees include the late Deborah Howell, one of the first women to become the top editor at a major American newspaper; Kaye Northcott, former editor of the Texas Observer; Larry Price, a Pulitzer Prize-winning photojournalist; the late Mike Quinn, a former reporter and beloved UT journalism professor; and Gayle Reaves, a Pulitzer Prize-winning editor and journalist. Two former UT journalism faculty members, Ron Gibson and Paul J. Thompson, will be honored posthumously with the Griff Singer Award, and New York Times reporter Emma Graves Fitzsimmons will receive the Rising Star Award.

Tickets for the Friends of The Daily Texan awards ceremony are available via www.friendsofthedailytexan.org. Funds raised will support initiatives such as scholarships, training and equipment for students who work at The Daily Texan.

Senator Zaffirini has won more than 900 awards for her professional and public service work, including more than 260 in communication. She has been honored repeatedly by the National Federation of Press Women and the Press Women of Texas (PWT), an organization that named her its Communicator of Achievement in 2015 and 1980. This year she won 25 statewide awards and the Ann Faragher Sweepstakes Award for the most winning entries in PWT's annual communication contest.

Reflecting her passion for higher education, her son, Carlos Zaffirini Jr., endowed scholarships in her honor at The University of Texas at Austin and Baylor College of Medicine. The Beaumont Foundation endowed a scholarship honoring her and Carlos Sr. at Texas A&M International University. 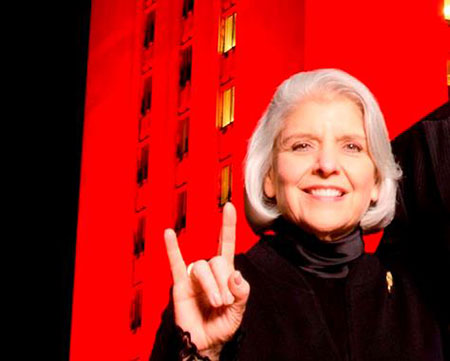 SENATOR JUDITH ZAFFIRINI, D-LAREDO, is a champion for freedom of speech and freedom of the press. She holds B.S., M.A. and PhD degrees in communication from UT-Austin.