(Austin) — Senator Judith Zaffirini, D-Laredo, on Friday (Nov. 20) received the J.C. Montgomery Child Safety Award from the Texas Office for the Prevention of Developmental Disabilities (TOPDD) for her decades of leadership for Texas children, including in the arenas of child safety, juvenile justice, children's mental health, infant health and services for children with disabilities.

"I am grateful to TOPDD for this meaningful honor," said Senator Zaffirini, a member of the Senate Health and Human Services Committee. "What's more, I share it with everyone who cares about preventing developmental disabilities and protecting Texas children from injury and harm."

She received the award not only for her dedication to the prevention of developmental disabilities, but also for her lifetime advocacy for the young, particularly children with disabilities. Her efforts have saved the lives of countless Texas children and improved the quality of life for even more.

As a member of the Senate Finance Committee she championed reducing the waiting lists for health and human services and secured funding for prevention programs; the Medicaid buy-in program for children with significant medical needs; and the birth defects registry, which helps identify research areas and links families to needed services.

A lifelong champion for child safety and the prevention of developmental disabilities, Senator Zaffirini authored and passed the legislation creating TOPDD in 1989 and served as a member of its executive board through 1995.

She also passed bills establishing committee members' training requirements, standards of conduct and staggered six-year terms. This year she extended TOPDD by amending legislation that would have terminated it.

"Collectively, we have made significant progress in raising awareness and developing strategies to reduce preventable injuries and developmental disabilities, but there's still much more to do," Senator Zaffirini said. "Count on me to continue to be a champion for Texas children, who are our only envoys to the future." 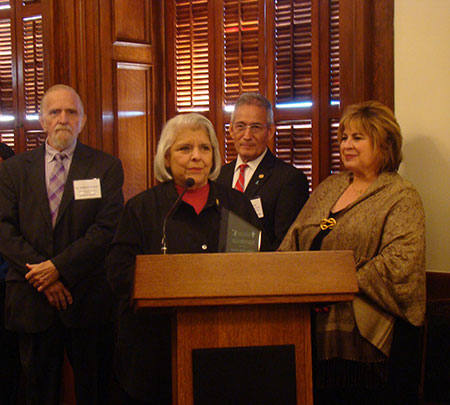