The organization's highest honor, the Legacy Award recognizes women who have created a foundation of leadership, commitment, mentorship and service and who have made a lasting impact through their professional and personal lives.

"I am grateful to the San Antonio Hispanic Chamber for this wonderful award," Senator Zaffirini said. "The honor is especially meaningful because it comes from an organization that prioritizes not only supporting San Antonio businesses, but also developing the next generation of leaders for our state."

The first Mexican American woman to be elected to the Texas Senate, to serve as President Pro Tempore of the Senate, and to serve as Governor for a Day, Senator Zaffirini also is the second highest-ranking Texas senator; the longest-serving woman in the Texas Senate; the highest-ranking woman, Hispanic and minority senator; and the senior senator for Bexar County, Central Texas and the border and coastal regions.

Often described as the hardest-working senators, she has sponsored and passed 895 bills and 52 substantive resolutions. Showing her bipartisan leadership and effectiveness, in the 2015 Republican-dominated Texas Legislature she passed 102 bills, breaking her personal record and passing more bills than any other legislator.

According to Capitol Inside, she has passed more bills than any other legislator in Texas history.

Senator Zaffirini has received more than 800 awards and honors for her legislative, public service and professional work, including more than 220 in communication. The Press Women of Texas (PWT) and the National Federation of Press Women have recognized her communications expertise repeatedly, and PWT has twice named her its Woman of Achievement.

Long recognized as a champion for women, she was named a "Texas Woman of the Century" by the Women's Chamber of Commerce of Texas, "Woman of the Year" by the Mexican American Women's Political Caucus and inducted into the Laredo Women's Hall of Fame and the Laredo Business Hall of Fame. In 2007 she won the "Latina Trailblazer" Award from the Hispanic Women's Network of Texas for her accomplishments on behalf of Hispanic women in Texas.

Senator Zaffirini is featured in more than 20 books, including Feminists Who Changed America, Texas Women Who Dared to be First, Texas Women: From Frontier to Future, From My Mother's Hands, Notable Hispanic American Women and Texas Women of the Century: Inspiring Stories of Great Texas Women.

"These women are as inspiring as they are accomplished, and I'm confident they will continue to make a lasting impact on San Antonio and the world," Senator Zaffirini said. 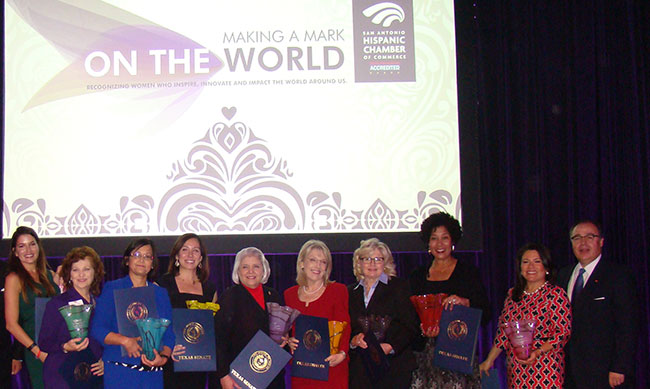