"I may never see you again," Donald Trump worried Wednesday on Fox News about his trip to Laredo today.

While many might be happy never to see Trump again, no one wishes him ill, and no one I know considers him threatened physically in any way. Does anyone really believe that he would come to the border if he thought his safety was the slightest bit jeopardized? His statement is a ridiculous and insulting attempt to appear brave — unnecessarily.

The divisive billionaire may be familiar with the border between New York and New Jersey, but these and other outrageous comments he's made — in addition to being horribly offensive — demonstrate his alarming lack of knowledge about the issues facing the Texas-Mexico border region today.

His visit to Laredo should be a living lesson not only about our real border security challenges, but also about the important relationships between the United States and Mexico. If he opens his mind to the truth and to reality, then his trip should be the equivalent of taking a course in binational trade, relations and friendship.

The reality of our southern border is far different from the one Trump has painted on the campaign trail, and I hope his visit today will help him correct his misperceptions and eliminate his irrational fears.

Most important, Texans hope he takes the opportunity to learn and listen. This may be a new approach for him. As we like to say in Laredo, Hablando se entiende la gente. Through communication we understand one another.

The people of Laredo are too welcoming and friendly to become a chapter in Trump's efforts to divide. It’s time to show him our South Texas hospitality and our brand of entrepreneurial spirit that continue to make our city great.

If Trump is willing to listen, he’ll learn that Laredo is a dynamic, thriving community where we cherish our cultural and economic ties with our sister city and sister country to the south. Our city's low unemployment rate, excellent business climate and status as the No. 1 inland port are a testament to the strong economic partnership between Mexico and its largest trading partner, the U.S.

Texas has dedicated significant resources to border security, and Trump will find hard-working law enforcement officers who work diligently to keep our community, state and nation safe. He should listen to them and learn about the challenges they face.

Contrary to Trump's vitriolic rhetoric, the border is not a dangerous war zone. Laredo and El Paso have been ranked among the safest cities in the country, and most border communities’ crime rates are equal to or lower than the state and national averages. It’s critical that we neither exaggerate nor underplay the seriousness of border crime, especially because these communities are tired of being used as piñatas in national political campaigns.

Border security is a multifaceted issue, which is why I hope Trump will take the opportunity to learn about cross-border truck traffic and Texas' infrastructure needs.

What's more, recent energy reforms in Mexico are opening new avenues for collaboration with businesses in the U.S., and Laredo is uniquely positioned to become an increasingly important center for the energy industry. This is particularly true because the Eagle Ford Shale, which has been an economic blessing in our region, extends into Mexico.

Our community also prioritizes conservation and wise stewardship of natural resources, especially because hunting and nature tourism are pumping money into our local economy.

Trump loves to talk about his money, and I hope he'll spend some of it while he's in town. He clearly has cash to burn, and anyone will tell you that Laredo's booming economy offers a far better return on investment than a doomed presidential campaign.

Trump could visit the local chamber of commerce to learn about business opportunities, attend a Laredo Lemurs baseball game, hit the links at one of our fabulous golf courses or enjoy our city's many wonderful opportunities for dining and shopping. He might even be able to get a good deal on a Donald Trump piñata.

If Trump looks closely, he'll find a city and state where people believe education and hard work are the pathways to a better quality of life. First-generation college students wait in long lines every day at our city's international bridges to join their American classmates at Texas A&M International University, Laredo Community College and the University of Texas Health Science Center Regional Campus.

Finally, Trump should understand that Laredo's American patriotism is second to none, which is why we celebrate it each year with the month-long George Washington's Birthday Celebration, which also pays tribute to our city's bicultural, bilingual and binational character.

Above all, I hope that during his visit, Trump will learn something about the value of international collaboration, cooperation, friendship and understanding.

If he doesn’t, he will have flunked the course. 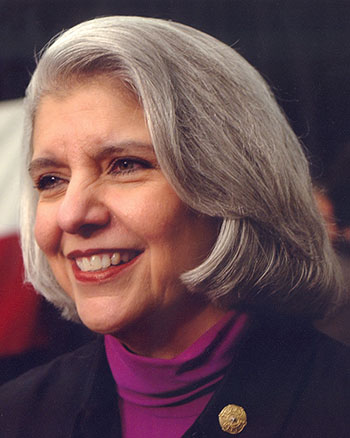