(AUSTIN) — Senator Judith Zaffirini, D-Laredo, was honored as the Press Women of Texas' (PWT) 2015 Communicator of Achievement at the organization's annual conference held June 12 in Fredericksburg.

The highest honor PWT bestows on its members, the award recognizes a member with a lifetime of achievement in communications and service to the community.

"I am grateful to PWT for this award, especially because I believe effective communication with my constituents is an essential part of my duty as state senator," Senator Zaffirini said. "What's more, I share PWT's longstanding commitments to freedom of the press, education and public service."

A member of PWT since 1974, Senator Zaffirini also was recognized with the Ann Faragher Sweepstakes Award for the most points accumulated in the organization's 2015 communications contest.

Her 27 winning entries in the 2015 PWT contest included seven First Place award-winners that went on to win awards at the national level, including her annual newsletter to constituents, Senator Judith Zaffirini Reports to the Families of Senate District 21, and her convocation speech to the employees of Laredo ISD.

Founded in Dallas in 1893 as the Texas Women’s Press Association, Press Women of Texas now includes women and men from all branches of the media. The venerable organization champions First Amendment rights, promotes awareness of professional standards in journalism and communications and provides valuable resources for persons working in the communications arena.

In addition to the communications contest for its members, PWT sponsors a writing contest for high school students and provides two scholarships annually to college students.

A distinguished communicator, educator and leader, Senator Zaffirini holds B.S., M.A. and PhD degrees from UT-Austin, each with a 3.9 grade-point average. Through her business, Zaffirini Communications, she provides professional communication services, including consulting, workshops and seminars, one-on-one coaching, keynote addresses and writing. 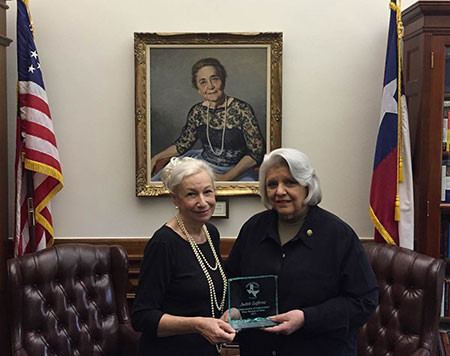 A DISTINGUISHED COMMUNICATOR, educator and leader, Senator Judith Zaffirini accepts the Communicator of Achievement Award from Angela Smith, President of the Press Women of Texas.