(AUSTIN) — The Texas Legislature unanimously approved Senate Bill 45 by Senator Judith Zaffirini, D-Laredo, naming a portion of a major highway in Atascosa County in honor of Texas State Trooper Terry Wayne Miller, who died in the line of duty.

Sponsored by Rep. Ryan Guillen, D-Rio Grande City, in the House of Representatives, the bill would name the portion of Interstate 37 from mile marker 102 to mile marker 115 the Trooper Terry Wayne Miller Memorial Highway.

Trooper Miller was killed in the line of duty on Oct. 12, 1999, when he was ambushed by a gunman in a rural area of Atascosa County while he was providing backup to two sheriff's deputies, who also were killed. He was survived by his wife, Karen, and two children, Amanda and Ashley.

"Trooper Miller served with bravery and courage and died trying to save the lives of his fellow law enforcement officers," Senator Zaffirini said. "Naming a segment of a heavily traveled Atascosa County highway for him would honor his great sacrifice and his distinguished service to the State of Texas."

A native of Mercedes, Miller was a graduate of Gregory-Portland High School in San Patricio County. He had worked as an officer with the Sinton Police Department and as a deputy with the San Patricio County Sheriff's Office before joining the DPS in 1997. He had been stationed in Freer in Duval County before transferring to Atascosa in September, 1998.

Funds to pay for the new highway signs will be raised by Sergeant Robert Bratten III, the son of retired Corporal Robert Bratten Jr., who was Trooper Miller's partner. Atascosa County will make a donation and also plans to dedicate two county roads in honor of Thomas Monse Jr. and Mark Stephenson, the two sheriff's deputies who were killed in the tragic incident. 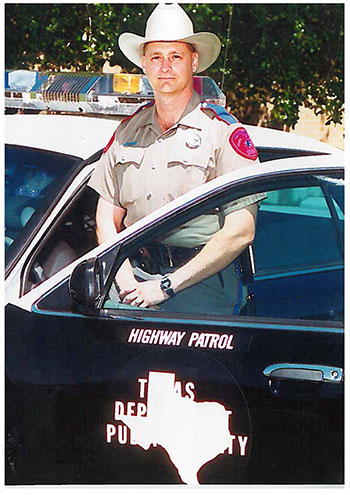 THE TEXAS LEGISLATURE recently passed a bill by Senator Judith Zaffirini, D-Laredo, that would name a portion of Interstate 37 in Atascosa County in honor of Texas State Trooper Terry Wayne Miller, who was killed in the line of duty.