(AUSTIN) — The Texas Senate today (Tuesday) passed legislation by Senator Judith Zaffirini, D-Laredo, that would shed light on the compensation paid to attorneys and guardians who are appointed by courts to represent a person, such as a minor, an elderly person or a person with disabilities, who is deemed unable of representing himself or herself.

"Two decades ago a Supreme Court task force found evidence that some state judges abused their discretionary authority by using appointment income to reward campaign supporters. Since then, there has been little reform, and the media has continued to report on problems." Senator Zaffirini said. "When even the appearance of abuse undermines the public's confidence in the entire judicial system, it is critical that we do more to promote transparency in the ad litem system."

SB 1369 would require courts appointing attorneys, guardians and mediators to submit to the Office of Court Administration data including the name of each person appointed by the court, the rate and total amount of compensation paid to each attorney in that year and the number of hours each attorney served ad litem for the appointed case. The information would be posted on websites accessible to the public and physically at the courthouse.

"It appears that more than $25 million in taxpayer money has been spent on these appointments through 2014," Senator Zaffirini said. "The true cost is likely much higher, however, especially because many courts have not reported the information. SB 1369 will help us gain a clearer picture of the costs and discourage potential abuses."

If a court fails to report the data, it would be made ineligible for state grant funding for a two-year period.

Senator Zaffirini, who previously served as Chair of the Senate Government Organization Committee and Co-Chair of the Joint Oversight Committee on Higher Education Governance, Excellence and Transparency, long has promoted legislation that would increase transparency in state government.

This session she has filed legislation enhancing the transparency of university system Boards of Regents' meetings, improving oversight of state contracting, promoting "Truth in Taxation" and centralizing state grant information in a searchable database. 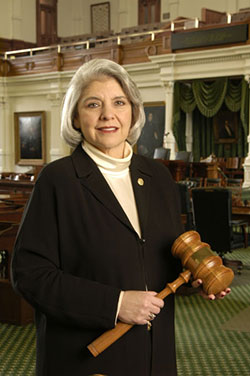 SENATOR JUDITH ZAFFIRINI is an advocate for increased transparency in state government, including the judicial system. Her Senate Bill 1369 would shed light on the compensation paid to court-appointed attorneys and guardians ad litem.