"Poor management of some contracts results in inadequate delivery of goods and services and costs taxpayers millions of dollars," Senator Zaffirini said. "Senate Bill 543 would improve state contracting at every stage of the process, including planning, procurement, contract formation and oversight."

Senator Zaffirini, who previously served as Chair of the Senate Government Organization Committee and a member of the Joint General Investigating Committee on State Contracting, has filed legislation to enhance state contracting every legislative session since 2005.

The bill is part of a package of meaningful contracting reforms Senator Zaffirini has filed this session. Her SB 1638, for example, would improve the training of state agency employees in contract management, including by requiring not only that the Comptroller's office create a training class schedule, but also that the Department of Information Resources train applicable state employees to use the Cooperative Contracts program. What's more, her SB 1053 would create a contract management division at the Legislative Budget Board, and her SB 1161 would increase the use of competitive bidding in the Cooperative Contracts process.

Senator Zaffirini's legislation is complementary to SB 20 by Senator Jane Nelson, R-Flower Mound, which was passed by the Senate last month.

"My legislation would require agencies to make a reliable determination of best value before proceeding with a contract," Senator Zaffirini added. "Because so much taxpayer money is at stake, it is critical that state agencies take a 'measure twice, cut once' approach to contracting, instead of doing the opposite."

A report released last month by the State Auditor's office revealed serious violations and deficiencies in a Health and Human Services Commission contract to privatize the Terrell State Hospital, including a finding that the agency did not determine "best value" before awarding the contract. The agency also has drawn fire for the way it handled a multimillion dollar contract for anti-Medicaid fraud software. The auditor has identified similar problems with contracting at agencies throughout state government.

The State Auditor previously had identified areas for improvement in all areas of contract management.

Provisions of SB 543 include: 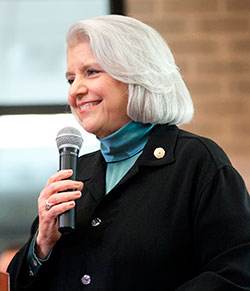 SENATOR JUDITH ZAFFIRINI is an advocate for legislation strengthening management and oversight of Texas' state agency contracts. Her Senate Bill 543 would improve state contracting at every stage of the process, including planning, procurement, contract formation and oversight.