Welcome to the official website for the
Texas Senate
Senator Judith Zaffirini: District 21
« Return to the press archives for Senator Zaffirini
printer-friendly
Press Release
FOR IMMEDIATE RELEASE
January 28, 2015
Contact: Will Krueger
(512) 463-0121
Senator Zaffirini Hosts WBCA and the City of Laredo at Texas Senate

Delegations representing WBCA and the city were honored as she unanimously passed Senate Resolutions 7 and 65, respectively. Earlier she hosted a reception honoring them at the Lieutenant Governor's Reception Room.

"I am delighted to welcome the delegations from Laredo and the Washington's Birthday Celebration Association to our beautiful Texas Capitol," Senator Zaffirini said. "What's more, I join them in inviting state legislators and all Texans to visit our dynamic, international city and enjoy our cherished annual patriotic celebration."

For 118 years WBCA has delighted Laredoans and visitors alike with a grand display of patriotism that includes parades, fireworks extravaganzas, galas and an international fair and exposition. With approximately 400,000 attendees annually, it is the largest celebration in the nation honoring our first president. This year's festivities began Jan. 22 and end Feb. 23.

The Texas Senate paid tribute to the month-long event by passing Senate Resolution (SR) 7 by Zaffirini, honoring WBCA and welcoming its representatives to the Texas Capitol.

Also included were the celebration's Abrazo Children, who will exchange hugs at the middle of the international bridge at the inspiring international friendship ceremony on Feb. 21. The United States' representatives are Valeria Montemayor and John Roman Galo, and Mexico's representatives are Alexandra Carriedo Villarreal and Franco Garza Carmona.

"WBCA is not only a proud display of our patriotism and civic pride, but also a wonderful opportunity to honor our relationship with our sister city, Nuevo Laredo, and our sister country, Mexico," Senator Zaffirini said. "International friendship and collaboration are the hallmarks of Laredo's success."

"Count on me to continue to champion the needs and interests of the City of Laredo," Senator Zaffirini said. 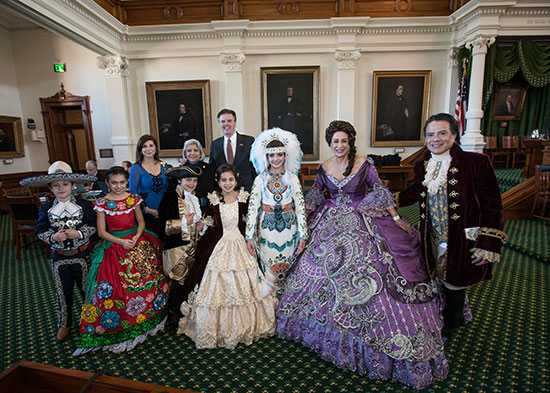