"These three strong, intelligent, dynamic Texas Exes love UT and undoubtedly will be leaders in the quest for excellence at all UT institutions, especially our flagship. Each brings expertise and experience that will be valuable assets in interacting with the legislature and in understanding that students are our top priority.

"I look forward to their confirmation by the Texas Senate and am confident that they will excel.

"As a proud Texas Ex, Gov. Abbott understands that UT is a treasure for our state and nation. His optimism in its future and in a brighter future for higher education in general was reflected in his first appointments.

"Today is a fine day for Texas and especially for the Longhorn Nation." 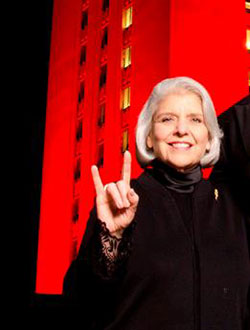 SENATOR JUDITH ZAFFIRINI is a champion for all Texas institutions of higher education, including her alma mater, The University of Texas at Austin.