"My bills were filed early to advance the priorities of Senate District 21 families: early and higher education and health and human services, including for the very young, the very old and persons with disabilities," Senator Zaffirini said. "Job creation, transportation, the environment and issues related to the Eagle Ford Shale also will be key issues during the 2015 session."

Of the 31 bills and one joint resolution filed Monday by Senator Zaffirini, 13 relate to higher education; 5, public education; and 2, health and human services. Her bills include the following:

Bills are numbered chronologically as they are filed, though 1-20 were reserved for the priorities of Lt. Governor-Elect Dan Patrick.

Because hers were the first Senate bills filed for 2015, Senator Zaffirini's are numbered 21-51.

"My staff and I worked hard throughout the interim and to pre-file some of our bills at the first opportunity,” she said. “We are continuing to collaborate with stakeholders and constituents to craft a legislative agenda that reflects the needs and interests of families in our 18 Senate District 21 counties. We will file additional legislation, especially as we finalize reports developed by the Senate Government Organization Committee, which I chair, and the Joint Oversight Committee on Higher Education Governance, Excellence and Transparency, which I co-chair."

"The 2015 legislative session is fast approaching, and I urge anyone interested in the legislative process to contact me or my staff so that we can consider any suggestions for improvement or additional legislation," she said. "Feedback is critical, and some of my best legislation was suggested by constituents."

Chair of the Government Organization Committee, Senator Zaffirini also serves on the Senate Higher Education, Finance, Natural Resources, Health and Human Services, Redistricting and Administration committees. A member of the Energy Council since 2009, she organized the Eagle Ford Shale Legislative Caucus in 2012.

"Senate District 21 stretches from the Rio Grande to the Colorado River, and its needs and priority issues are diverse," she said. "Because of my committee assignments and as the second-highest ranking state senator, I am uniquely positioned to continue to have a positive impact on the issues that matter to SD 21 families." 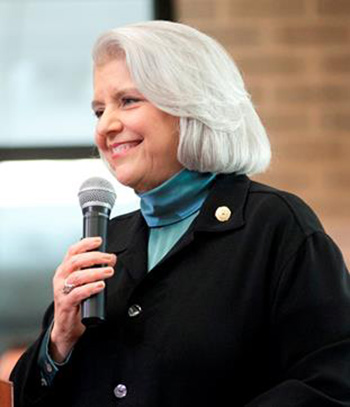 SECOND IN SENIORITY in the Texas Senate, Senator Judith Zaffirini champions the priorities of SD 21 families, including higher and early education and health and human services, especially for the very young, the very old and persons with disabilities. Chair of the Government Organization Committee, Senator Zaffirini also serves on the Senate Higher Education, Finance, Natural Resources, Health and Human Services, Redistricting and Administration committees.