"As the state senator for Guadalupe County, I am delighted to champion the needs and priorities of our retired teachers," said Senator Zaffirini, who has 13 years of teaching experience. "What's more, I am grateful for their many dedicated years of service in education, during which they have impacted positively the lives of countless Texas students."

A member of the Senate Finance Committee, Senator Zaffirini champions funding that enhances the financial stability of the Teacher Retirement System of Texas (TRS), which is the country's sixth largest public pension fund.

During the 2013 legislative session the state budget (Senate Bill 1) increased the state's contribution rate from 6.4 percent to 6.8 percent, an increase of more than $200 million.

Senator Zaffirini also praised the efforts of retired teachers who helped secure the passage of Senate Bill 1458, which made the TRS system actuarially sound, thereby allowing a cost-of-living increase for thousands of retirees for the first time in more than 11 years.

The increase was originally set to cover only those who had retired in 1994 or earlier, but Senator Zaffirini worked to expand the raise to all retirees who retired in 2004 or earlier.

"I only wish we could have expanded it to include all retired teachers," Senator Zaffirini said. "Because we made TRS actuarially sound, however, we enhanced the likelihood of future cost-of-living increases for additional retirees."

Because 95 percent of the system's members do not participate in Social Security, TRS is the only lifetime annuity for thousands of retired teachers and school employees.

The senator also discussed issues that remain to be addressed, including a looming budget shortfall for TRS-Care, the retiree health insurance program.

"If we don't act expeditiously to resolve this shortfall, TRS-Care participants could see premium increases as high as 135 percent, and benefits could be slashed to draconian levels," she said. "We cannot let that happen to our retired teachers and school employees, many of whom are living on fixed incomes." 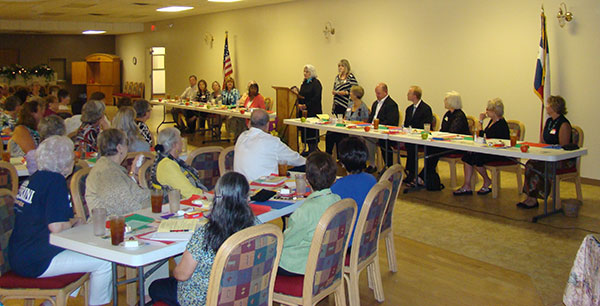 SENATOR JUDITH ZAFFIRINI speaks to members of the Seguin-Guadalupe County Retired Teachers. A member of the Senate Finance Committee, she champions funding to improve the financial stability of the Teacher Retirement System of Texas.