Baylor College of Medicine on Tuesday (Sept. 30) announced the establishment of the Senator Judith Zaffirini Scholarship Fund, which will provide need-based financial aid to medical students from South Texas.

The scholarship was endowed by the senator's son, Carlos Zaffirini Jr., to recognize his mother's longtime commitment to higher education in general and the Baylor College of Medicine in particular.

"For more than 100 years, Baylor College of Medicine has educated some of the finest medical professionals in Texas and the country," Senator Zaffirini said. "It is my pleasure to work with the Harris County delegation to champion the institution's stellar programs, and I am delighted that this scholarship will enhance medical education opportunities for more Texas students."

Co-Chair of the Joint Oversight Committee on Higher Education Governance, Excellence and Transparency and former Chair of the Senate Higher Education Committee, the senator has prioritized legislation that strengthens graduate medical education and expands access to financial aid for all Texas students. A member of the Senate Finance Committee, she secured more than $73 million for Baylor College of Medicine in 2013.

"Senator Zaffirini has been an incredible supporter of Baylor and defender of higher education. She always has been on the side of better education and is truly one of the special people in the state of Texas working on behalf of higher education," said Dr. Paul Klotman, President, CEO and Executive Dean at Baylor College of Medicine. "We are very grateful to Carlos for making this pledge in honor of his mother for scholarships for South Texas medical students."

Baylor has forged partnerships with six South Texas high schools to provide education to students interested in the health professions. What's more, it has partnered with The University of Texas-Pan American to expand medical education in South Texas by establishing the Premedical Honors College, a program that offers students joint admission at both institutions.

"My mother was elected when I was four years old and has fought with passion since then to make sure that young people have educational opportunities, and her passion has inspired me to create this scholarship," Carlos Zaffirini Jr. said. "How special will it be if one of the students who receives it comes back to South Texas to change lives for the better in the border region."

Carlos Zaffirini Jr. also created a scholarship with an initial $100,000 endowment in his mother's name at their alma mater, The University of Texas at Austin. 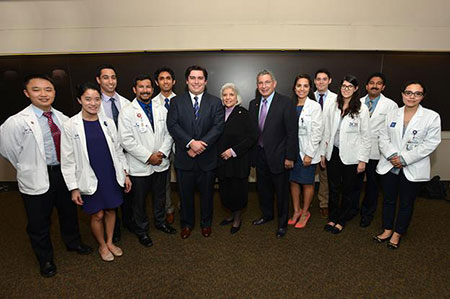