"Our parks and public lands are wonderful assets that impact positively the quality of life in our communities," the senator said. "They not only promote conservation and educate Texans about our natural resources, but also encourage active lifestyles and provide significant economic benefits."

Information about these and other events throughout Texas is available via www.publiclandsday.org.

A member of the Senate Natural Resources Committee, Senator Judith Zaffirini champions Texas' state parks and public lands and the abundant recreational and educational opportunities they provide for SD 21 families.

TPWD is headquartered in SD 21 and is overseen by the Texas Parks and Wildlife Commission, chaired by Dan Hughes Jr. of Bee County. Senator Zaffirini sponsored his gubernatorial nomination.

The agency employs more than 3,000 Texans and operates an internship program that allows college students to gain hands-on experience in fields related to natural resources.

Communities throughout Senate District 21 are investing in parks and public lands, and Senator Zaffirini prioritizes legislation and funding supporting them. A member of the Senate Finance Committee, she has helped secure more than $448 million for TPWD since 2005, including a 16 percent funding increase during the 2013 legislative session. In 2009 she also secured $5.5 million for a special needs park in Bexar County.

In 2014 Senator Zaffirini joined La Salle County leaders in celebrating the rededication of Martinez Park, which is being expanded after voters approved $8 million in bond funding.

She also supported efforts in Guadalupe County to expand the Walnut Creek Trail and Greenbelt, supported by a $1.8 million grant from the Texas Department of Transportation. 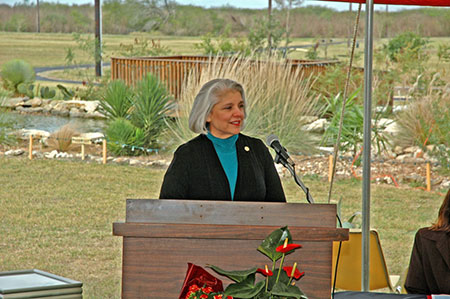 SENATOR JUDITH ZAFFIRINI speaks at the dedication of the Joe Gulley Park in Karnes County. A member of the Senate Natural Resources Committee, she champions Texas' parks and public lands.