"Operation Lone Star is an outstanding example of a successful military and civil collaboration with a clear and meaningful humanitarian mission," Senator Zaffirini said. "For sixteen years this partnership has not only provided critical medical services to thousands of children and families who need them, but also enhanced emergency preparedness and strengthened relationships between state and military providers and local communities. Equally important, this exercise offers countless meaningful opportunities to improve cross-cultural competency and English/Spanish medical vocabularies."

National Guard members came from throughout Texas; other states, including Tennessee; and even from Chile.

After the 2001 terrorist attacks, Senator Zaffirini wrote to Texas Adjutant General Maj. Gen. Daniel James III to recommend the creation of a division of state military medical forces that could help communities respond to medical emergencies and catastrophic events. In 2003 the Texas Medical Rangers were created based on the senator's recommendation and Gov. Rick Perry's approval. Part of the Texas State Guard, the Rangers respond to Texas public health emergencies and provide significant support each year to OLS.

"I especially am proud to have contributed to the creation of the Texas Medical Rangers and growth of Operation Lone Star," Senator Zaffirini said. "The free medical services it provides are critical, especially because South Texas counties continue to have the highest uninsured rates in our state."

"Operation Lone Star has been able to reach so many families because it locates its clinics at public schools, which are the focal points of so many South Texas communities," Senator Zaffirini said.

For more information, contact your county health department or dial 2-1-1. 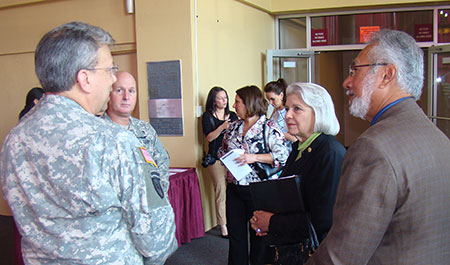