The Committee addresses issues related to energy, air quality and water, including those related to the Eagle Ford Shale and the implementation of 2013 legislation funding projects in Texas' State Water Plan. It also has jurisdiction over matters related to the Texas Railroad Commission, which regulates the state's oil and gas industry, and the Texas Commission on Environmental Quality.

"Thoughtful and prudent environmental stewardship is critical to the long-term viability of our state's economy," Senator Zaffirini said. "We believe that we can succeed only through statewide collaboration with state and local leaders, industry representatives, stakeholders, advocates and everyone interested in addressing the timely issues at hand and their impact on our great state."

Senate District 21 is in the heart of the Eagle Ford Shale and includes the majority of rigs, the majority of production and the shale's highest-producing counties. An organizer of the 29-member Eagle Ford Shale Legislative Caucus, Senator Zaffirini has championed short- and long-term solutions to the impacts of the shale on transportation, education, public safety, housing, the environment and other areas.

"As development continues in Texas' energy-producing regions, we must work collaboratively to manage our natural resources responsibly, including not only our tremendous oil and gas reserves, but also our air and water," Senator Zaffirini said.

Second in seniority in the 31-member Texas Senate, Senator Zaffirini also is Chair of the Government Organization Committee; Co-Vice Chair of the Joint Oversight Committee on Higher Education Governance, Excellence and Transparency; and a member of the Senate Finance, Higher Education, Health and Human Services and Administration committees. 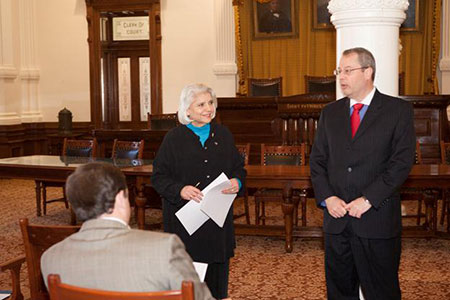 SENATOR JUDITH ZAFFIRINI, D-Laredo, and Railroad Commissioner David Porter, address the Eagle Ford Shale Legislative Caucus (EFSLC) at the State Capitol. She is a member of the Natural Resources Committee and an organizer of the EFSLC. The Texas Railroad Commission is the chief agency responsible for regulating the state's oil and gas industry.