These moving words by President John F. Kennedy also apply to women and reflect perfectly the importance of Memorial Day, which honors those who paid the ultimate price and made the ultimate sacrifice to defend our country and our freedoms. As we mourn their loss, we always must honor their legacy, their courage, and their patriotism.

As we celebrate our love for our country, let us never forget our fallen heroes. Many of them, especially our first paratroopers, were as young as 16 and 17. Some left behind young spouses they hoped to grow old with, children they never saw and shared dreams they never realized.

Most of them reversed the natural order of society: In times of peace, children typically bury their parents. In times of war, parents too often bury their children.

Our fallen heroes died too soon. We honor them by strengthening our resolve that their legacies live forever and paying tribute to them not only on Memorial Day, but every day. May God bless America! 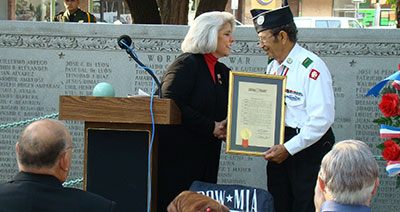 SENATOR JUDITH ZAFFIRINI presents a Memorial Day proclamation honoring our fallen heroes to Korean War veteran Ernesto Sanchez. Behind them is a memorial wall listing the names of local service members who died serving our country.