(AUSTIN) – Senator Judith Zaffirini, D-Laredo, on Friday (May 16) received the Legislative Champion Award from the Texas Alliance of Boys and Girls Clubs.

As a member of the Senate Finance Committee, Senator Zaffirini helped secure $9 million in funding over the last six years for the Texas Alliance of Boys and Girls Clubs for its Texas Academic Innovation and Mentoring Program (Texas AIM), an academic intervention program that provides multi-layered support to at-risk children. She also supported funding for the Statewide Youth Services Network (SYSN), which helps Boys and Girls Clubs operate juvenile delinquency prevention programs for youth ages 6-17. What's more, in 2008 she worked with the Laredo Boys and Girls Club and the South Texas Food Bank to raise awareness of child hunger.

A longtime supporter of Texas Boys and Girls Clubs in general and the Boys and Girls Clubs of Laredo in particular, the senator is proud that the Laredo club has been serving youth in her hometown since 1946. Her parents took her and her sisters to swim, play ping pong and enjoy family activities at the club in the 1950s.

There are 372 Boys and Girls Clubs in Texas, and 170 Texas communities have at least one. These clubs serve more than 342,000 children who benefit from trained, caring staff and volunteers who help them take control of their lives, envision productive futures and reach their goals. 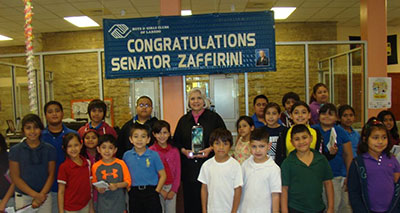