"It is with deeply mixed emotions that I wish Chancellor Francisco Cigarroa only the best as he departs the UT system and resumes his career as a full-time pediatric liver transplant surgeon. Although I share his joy in his returning to his first professional joy and San Antonio family, I am distressed that he is leaving higher education at a time when his leadership is needed. Given the circumstances, no one can blame him, and everyone can understand his decision and support it—myself included.

"The chancellor's accomplishments surpassed even his own expectations. After starting his tenure on a high note with exemplary goals that included enhancing research and South Texas opportunities, he will end it only after reaching those goals and more, including creating medical schools for UT-Austin and for South Texas. This is as impressive as it is noteworthy and will be part of his legacy at the UT system.

"Dr. Cigarroa is a polished statesperson who always casts issues in a positive light and sees conflicts as opportunities for building consensus. Undeniably, however, he has endured unmitigated stress from the rogue regents who want UT President Bill Powers fired. Those who were unhappy with his recommendation to continue the heavily supported employment of President Powers reportedly turned their powerful weapons on him.

"Although I am confident that he will deny any disharmony, I am equally confident that his decision was influenced by the continued negative circumstances at hand. His action personifies the harmful repercussions of the current attack on those who pursue excellence, protect the privacy of students and strive for true transparency for all.

"It is ironic that the very regents who ostensibly demand transparency and accountability from educators whom they disrespectfully perceive as their minions simultaneously are secretive about their own public records and actions.

"Now is the time for the strong majority of the UT Board of Regents to express their strong support for President Powers, to search for a chancellor who is committed to excellence, to demand that the regents practice good governance and to assure the Longhorn Nation that they will do their best to meet expectations and responsibilities." 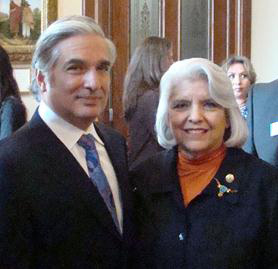 CHANCELLOR FRANCISCO CIGARROA has led The University of Texas System since 2009. He has worked closely and effectively with Senator Judith Zaffirini, D-Laredo, to prioritize access, affordability and excellence in higher education.