(AUSTIN) — Senator Judith Zaffirini, D-Laredo, today (Tuesday) honored students from Mexico and Spain who attend The University of Texas at Austin (UT) with a reception at the Texas Capitol.

Sponsored for the thirteenth consecutive year by BBVA Compass Bank, the reception provided students an opportunity to interact with legislators and top-ranking UT officials.

"As a proud alumna of The University of Texas at Austin and the first Hispanic woman in the Texas Senate, I am delighted to welcome these students from Mexico and Spain to the Texas Capitol," Senator Zaffirini said. "By offering outstanding exchange programs, UT-Austin is not only promoting intercultural exchange and understanding, but also enhancing the educational experience for all students." 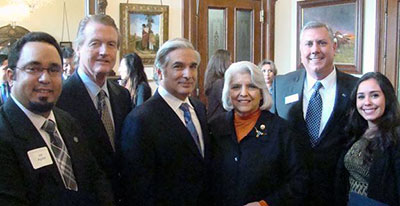