Welcome to the official website for the
Texas Senate
Senator Judith Zaffirini: District 21
« Return to the press archives for Senator Zaffirini
printer-friendly
Press Release
FOR IMMEDIATE RELEASE
September 13, 2013
Contact: Will Krueger
(512) 463-0121
Texans Speak Out at Regional Meeting Regarding TxDOT Proposal to Convert Roads to Gravel

(AUSTIN) — More than 200 South Texans voiced their opinions and asked questions Tuesday (Sept. 10) at a regional public meeting in Cotulla regarding the Texas Department of Transportation's (TxDOT) plan to convert certain paved highways to gravel. The meeting, hosted by the Eagle Ford Shale Legislative Caucus (EFSLC), provided an opportunity for concerned citizens, local leaders and legislators to question high-ranking TxDOT officials about the plan and discuss potential solutions.

It was co-hosted at the Alexander Convention Center by the Eagle Ford Consortium, the South Texas Energy & Economic Roundtable, America's Natural Gas Alliance, La Salle County and the City of Cotulla.

"Our region's rural highways are critical to our way of life, and we repeated and reinforced our serious concerns about the plan to turn them into gravel," said Senator Judith Zaffirini, D-Laredo, an organizer of the Caucus. "I am encouraged that the conversation with TxDOT is continuing.

"The agency provided a commitment not only to work with counties to develop alternatives, but also not to convert any more roads to gravel before the end of October," the senator added. "It is critical that TXDOT have better collaboration and communication with legislators and local leaders going forward, including involving them in the decision-making process and developing appropriate policies, procedures, criteria, and rules regarding this and other TXDOT decisions that impact our communities.

"We also must ensure that TxDOT develops a plan and a timeline for reconverting any gravel roads to paved roads as part of its Unified Transportation Plan. Finally, it is imperative that legislative committees address this issue. Accordingly, the EFSLC will request that Lt. Gov. David Dewhurst and Speaker Joe Straus charge legislative committees to address graveling and other recent TXDOT proposals."

Their options include directing the finance, appropriations and transportation committees of the Senate and of the House of Representatives to hold hearings, to appoint an interim committee and to appoint the Select Committees on Transportation Funding, Expenditures and Finance authorized by House Bill 1 (Third Called Special Session.)

"Bringing everyone to the table is a start, and hopefully we've move passed the blame-game so that we can come to a solution," said Rep. Guillen. "Bottom line—we have a problem, we need action, and tearing up these roads is not an option."

"I want to thank the community for participating in the public meeting," said Rep. King. "I am disappointed that TxDOT has chosen this path but want to work with them to maintain paved roads in Texas."

"This issue of graveling has surprised so many South Texans," said La Salle County Judge Rodríguez. "We feel that if the consequences had been laid out to our Legislature, maybe we would have had only one special session instead of three."

The county judges expressed their strong continued opposition to the paved-to-gravel road proposal and pledged to collaborate in identifying alternatives.

Participants submitted more than 35 questions for agency representatives, all expressing concerns about the wisdom, safety, efficiency, economy, impact and consequences of graveling roads. No one expressed support.

Before the meeting, local leaders guided TxDOT officials on a tour of several of the Farm-to-Market roads slated to be graveled in Dimmit and La Salle Counties. Tour participants were able to see first-hand how important the highways are to farmers and ranchers, the oil and gas industry and local residents in rural communities.

Through the Caucus, 28 members of the Texas Legislature address issues related to natural resource production in the Eagle Ford Shale and collaborate to develop and support associated legislation. The Caucus focuses on short- and long-term solutions to the impacts of the EFS on transportation, education, public safety, housing, the environment and other areas. Additional information about the Caucus and about the Sept. 10 meeting is available from Rachel McClure, 512/463-1818. Persons interested in signing up to receive documents about the roads issue via Dropbox should contact rachel.mcclure@senate.state.tx.us. 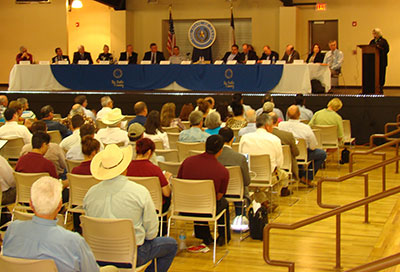 SENATOR JUDITH ZAFFIRINI (at lectern) addresses the more than 200 participants at the regional meeting hosted by the Eagle Ford Shale Legislative Caucus in Cotulla on Tuesday. Attendees included concerned residents, local leaders from eight counties, and officials from the Texas Department of Transportation (TxDOT). TxDOT answered questions about the agency's plan to convert certain paved roads to gravel. 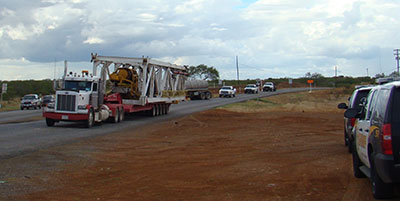 A LARGE TRUCK carrying heavy equipment takes up both lanes and delays traffic on FM 469 in La Salle County on Tuesday. The Texas Department of Transportation (TxDOT) has proposed converting FM 469 and other paved highways to gravel.