"Investing in our transportation infrastructure is critical not only to ensuring public safety, but also to preserving the tremendous economic benefits associated with development in the Eagle Ford Shale," Senator Zaffirni said. "This funding is a significant step in the right direction for our state roadways, but, unfortunately, it does not fund county-maintained roads. Count on me to continue to champion funding for both state and county roads."

A member of the Senate Finance Committee, Senator Zaffirini has prioritized securing funding for highways impacted by Shale development. Her Bill 1778 would have directed a percentage of severance taxes on oil and gas production to facilitate transportation infrastructure projects in the shale regions, including comprehensive construction, maintenance and improvement of county and state roads impacted by oil and gas development.

The majority of rigs and the majority of production in the Eagle Ford Shale are in Senator Zaffirini's District 21, as are the highest-producing counties.

More than 1,000 loaded trucks are necessary to bring one well into production. Accordingly, the volume of traffic in the Eagle Ford Shale has increased dramatically, as has the number of traffic accidents. In McMullen County, for example, accidents increased by 300 percent since 2008, according to TxDOT.

HB 1025 will now be considered anew by the Texas House of Representatives, which will either approve amendments made by the Senate or call for the appointment of a conference committee to work out the differences between the two versions of the bill.

"It is my hope that the House will concur with Senate amendments and keep the funding for Eagle Ford Shale roads in the bill," Senator Zaffirini said. 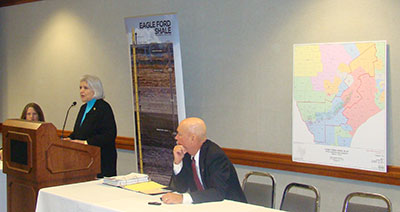 SENATOR JUDITH ZAFFIRINI, D-Laredo, speaks to attendees at a recent joint briefing hosted by the Eagle Ford Shale Legislative Caucus and the House Energy Caucus. At right is Dr. Thomas Tunstall, director at the Institute for Economic Development at The University of Texas at San Antonio.