To celebrate the nationally inimitable milestone, the Texas Senate presented her with a commemorative gavel and passed Senate Resolution 973 authored by Senator Kevin Eltife, R-Tyler, and co-authored by all other senators.

"Each vote I cast in the Texas Senate reflects my commitment to balancing the needs and interests of Senate District 21 families with those of our great state," Senator Zaffirini said. "I am grateful for the opportunity to make difference in the lives of Texans, especially the very young, the very old and persons with disabilities."

Senator Zaffirini's legendary work ethic also is reflected in her 100 percent perfect attendance in the Texas Senate since 1987, except for breaking quorum deliberately in 2003 to prevent an untimely redistricting that the U.S. Supreme Court ruled (2006) violated the Voting Rights Act and disenfranchised voters in her Senatorial District 21. Dedicated to serving her constituents, she arrives at the Capitol daily before the sun rises and always is willing to stay as late as necessary.

Zaffirini has been recognized routinely as one of the best and hardest-working legislators. In 1997 State Legislatures magazine highlighted her 15,000th consecutive vote in an article titled, "15,000 and Still Counting: The Tireless Texan." No one responded to the magazine's request for information about similar records in any other state. When she approached 30,000 consecutive votes in 2003, The Alcalde, the official alumni magazine of The University of Texas at Austin, called her the "Cal Ripken of the Texas Legislature."

In 2011 Texas Monthly named her to its list of "10 Best Legislators" for the fourth time, and in 2009 the magazine noted Zaffirini's tenacity in championing the interests of her constituents: "No one works harder. No one is more organized. No one is more relentless."

The first Mexican American woman to be elected to the Texas Senate, to serve as President Pro Tempore of the Senate, and to serve as Governor for a Day, Senator Zaffirini also is the second highest-ranking Texas senator; the longest-serving woman in the Texas Senate; the highest ranking woman, Hispanic and minority senator; and the senior senator for South Texas, Central Texas and the Border Region.

Named an Honorary Nun by the Sisters of Mercy, Senator Zaffirini attributes her success in the Texas Senate partly to lessons learned from the Ursuline nuns, particularly her punctuality and reverence for decorum. To help others, particularly freshmen, master the complexities of the Senate, each session she voluntarily writes a Presiding Guide handbook that memorializes the procedures and language for passing bills and for presiding over the Senate and Senate committees.

She has received more than 670 awards and honors for her legislative, public service and professional work, including more than 160 in communication. What's more, she is the namesake of the Student Success Center at Texas A&M International University, the library at Laredo Community College, an elementary school in Laredo's United Independent School District, a drug rehabilitation center in Edinburg and the major road at Lake Casa Blanca International State Park. Her trailblazing public service has led to her being featured in 24 books, including textbooks, and referenced in another 16 books.

A lector at Blessed Sacrament Catholic Church since 1983, she has prioritized faith and family throughout her tenure, having been married to Attorney Carlos Sr., her high school sweetheart, for 48 years. Their son, Carlos Jr., is an attorney and health care finance consultant. 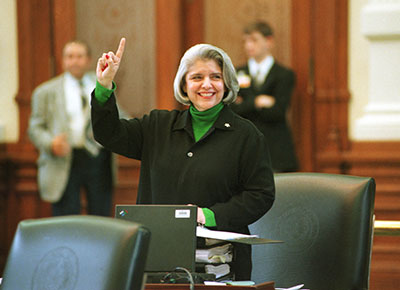 SENATOR JUDITH ZAFFIRINI today cast her 50,000th consecutive vote in the Texas Senate. A champion for early and higher education and health and human services, she has been recognized routinely as one of the best and hardest-working legislators.