(AUSTIN) — The Texas Senate this week passed three bills by Senator Judith Zaffirini, D-Laredo, that improve the State of Texas' contracting practices, including by enhancing contract oversight and uniformity.

"Texas state agencies and institutions of higher education manage thousands of contracts valued cumulatively at more than $100 billion," said Senator Zaffirini, Chair of the Senate Government Organization Committee. "Proper oversight and transparency in state contracting is critical, especially because so much taxpayer money is at stake."

Senator Zaffirini's Senate Bill (SB) 1680 promotes greater uniformity in state contracts. The bill would standardize contract management practices for all state agencies, including by requiring that the agencies establish formal contracting guidelines, maintain all contracts in a central location and include uniform provisions in each contract. The bill also would prohibit a major contract from being negotiated by only one employee.

Her SB 1681 enhances contract oversight by requiring the comptroller to develop training programs for contract managers; consult with state agencies in developing forms, contract terms and criteria; and establish a uniform evaluation process and include performance reviews in a vendor tracking system.

"Contracts must be monitored closely at every stage of the process, including solicitation, negotiation and management," Senator Zaffirini said. "Proper contract oversight helps mitigate risk, contain costs and ensure quality and efficiency."

SB 1679 by Zaffirini would improve state agency procurement by requiring the comptroller to leverage state spending in the most efficient manner and to determine if certain services may be leveraged for multiple state agencies in one statewide contract at a cost savings.

A champion for government efficiency and transparency, Senator Zaffirini has introduced legislation to improve state contracting practices each legislative session since 2005. 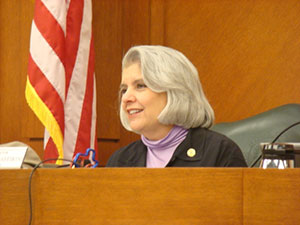 SENATOR JUDITH ZAFFIRINI, D-Laredo, champions government efficiency and transparency in the Texas Senate. Chair of the Senate Government Organization Committee, she is a leader in improving state agency contracting and procurement.