(AUSTIN) — The Eagle Ford Shale Legislative Caucus (EFSLC) and the House Energy Caucus today (Tuesday) hosted a joint legislative briefing to update state policymakers regarding water issues in the Eagle Ford Shale and new research regarding the economic impact of oil and gas development in the shale counties.

Attendees listened to presentations from a panel regarding water recycling; Railroad Commissioner David Porter regarding the report issued recently by the Eagle Ford Shale Task Force; and Dr. Thomas Tunstall, who reviewed the results of a new study released today by The University of Texas at San Antonio's Institute for Economic Development.

"The research conducted at UTSA provides us with valuable information, findings and recommendations related to the Eagle Ford Shale and its impact on Texas' economy," said Senator Judith Zaffirini, D-Laredo. "This research is a wonderful resource not only for state policymakers and business leaders, but also for all stakeholders who are working to create sustainable communities throughout the shale region. Equally important, it underscores the critical role of the higher education community in public service and economic development."

A panel of industry leaders-including several specializing in water recycling-discussed water issues related to oil and gas development in the Eagle Ford Shale, including the possible use of propane in place of water in fracking.

"Water conservation and recycling are critical in the Eagle Ford Shale," Senator Zaffirini said. "My Senate Bill (SB) 1779, for example, would incentivize the use of recycled water in oil and gas drilling or production."

Legislators who represent counties in the shale founded the Eagle Ford Shale Legislative Caucus in 2012, envisioning it as a means for lawmakers to address issues related to oil and gas production in their districts and throughout the state. The caucus will focus on short- and long-term solutions to the impacts of the EFS on transportation, education, public safety, housing, environment and other areas. 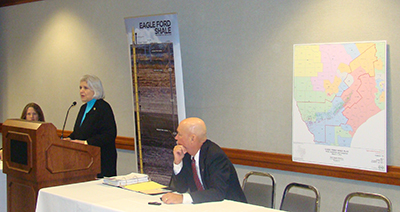 SENATOR JUDITH ZAFFIRINI, D-Laredo, speaks to attendees at a joint briefing hosted by the Eagle Ford Shale Legislative Caucus and the House Energy Caucus. At right is Dr. Thomas Tunstall, director at the Institute for Economic Development at The University of Texas at San Antonio, who briefed attendees regarding the results of a new economic impact study conducted by the institute.