Welcome to the official website for the
Texas Senate
Senator Judith Zaffirini: District 21
« Return to the press archives for Senator Zaffirini
printer-friendly
Press Release
FOR IMMEDIATE RELEASE
March 8, 2013
Contact: Will Krueger
(512) 463-0121
Senator Zaffirini Receives Presidential Citation from The University of Texas at Austin

Created in 1979 as UT's equivalent of an Honorary Degree, the award was presented by President Bill Powers at an impressive ceremony at the university's AT&T Conference Center.

Other honorees were Pamela Willeford, former U.S. Ambassador to Switzerland and Liechtenstein; and two legendary philanthropists, Joe Jamail of Houston and Peter O'Donnell of Dallas. The four were recognized for their superb leadership, sustained commitment and exceptional service to the university.

"This award is especially meaningful because it comes from my alma mater and because higher education is my passion," said Senator Zaffirini. "It is an incredible honor to join the ranks of past Presidential Citation honorees, including Texas icons such as Lady Bird Johnson and Joe and Dr. Teresa Lozano Long."

Four UT students will receive endowed scholarships in the names of the four Presidential Citation honorees.

A champion for higher education in general and UT-Austin in particular, Senator Zaffirini was Higher Education Chair in the Senate from 2006 to 2012.

She also was Co-Chair of the Joint Oversight Committee on Higher Education Governance, Excellence, and Transparency and is a member of it. 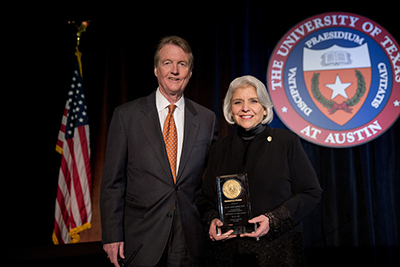 SENATOR JUDITH ZAFFIRINI, D-Laredo, accepts the Presidential Citation from UT-Austin President Bill Powers. A champion for higher education, she was recognized for her superb leadership, sustained commitment and exceptional service to the university.