(AUSTIN) — Lt. Gov. David Dewhurst on Friday (Jan. 18) reappointed Senator Judith Zaffirini, D-Laredo, as Chair of the Senate Government Organization Committee and a member of the Senate Committees on Finance, Higher Education, Health and Human Services and Administration. A member of the Legislative Budget Board, she also serves as Co-Chair of the Joint Oversight Committee on Higher Education Governance, Excellence and Transparency.

"Because of these committee assignments, I continue to be well-positioned to make a difference for the families of our district and our state," Senator Zaffirini said. "I look forward to working with my colleagues to address our state's pressing challenges, including those related to education and health and human services."

A member of the Health and Human Services Committee since 1989, Senator Zaffirini is known for her expertise and leadership in addressing early childhood education, higher education and health and human services issues.

Senator Zaffirini chaired the Higher Education Committee from 2009 to 2012, the Higher Education Subcommittee (2005-09), Senate Finance Subcommittees on Capital Funding for Higher Education (2006) and on State Contracting Practices (2004) and the Health and Human Services Committee from 1993 to 1999. Since 2001 Senator Zaffirini has served on the Senate Committee on Administration that certifies legislation for the Local and Uncontested Calendar-approximately 75 percent of the legislation passed by the Senate each session, including many bills important to communities in Senate District 21 and across Texas.

"My committee assignments reflect our priorities of improving educational opportunities for all and maintaining our commitment to the very young, the very old and persons with disabilities," Senator Zaffirini said. 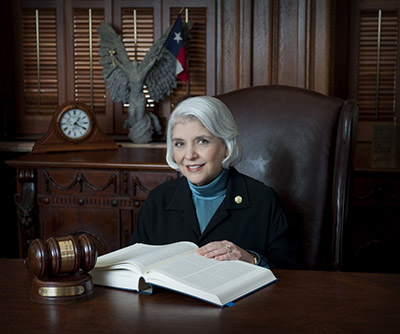 SECOND IN SENIORITY IN THE 31-MEMBER TEXAS SENATE, Senator Judith Zaffirini is Chair of the Senate Government Organization Committee and Co-Chair of the Joint Oversight Committee on Higher Education Governance, Excellence and Transparency. She also serves on the Legislative Budget Board and the Senate Committees on Finance, Higher Education, Health and Human Services and Administration.