(AUSTIN) — Senator Judith Zaffirini, D-Laredo, the second highest-ranking Texas state senator, today (Tuesday) was sworn in for a new term representing Senatorial District 21, which includes all or part of 18 counties and stretches from the Rio Grande to the Colorado River and to the Port of Corpus Christi. Lt. Gov. David Dewhurst presided during Opening Day Ceremonies, officially gaveling to order the 83rd Texas Legislative Session.

"The new legislative session provides countless opportunities to make a difference in the lives of SD 21 families," Senator Zaffirini said. "I welcome the exciting challenges of representing them in the Texas Senate and especially look forward to prioritizing their needs and interests. These include higher and public education and health and human services, especially for the very young, the very old and persons with disabilities."

Senate District 21 has changed dramatically. It includes the majority of the rigs, the majority of production and the highest producing counties in the Eagle Ford Shale and the Circuit of the Americas in southeast Travis County.

"The changes in our district mean that new issues must be addressed," Senator Zaffirini said. "We must collaborate to reap the benefits of these economic development treasures and to resolve their related problems and challenges."

First elected in 1986, the senator has received more than 670 awards and honors for her legislative, public service and professional work, including more than 160 awards for excellence in communications.

Her legendary work ethic is reflected in her 100 percent voting record in the Texas Senate, where she has cast more than 47,580 consecutive votes since 1987. She has sponsored and passed 725 bills and 52 substantive resolutions and co-sponsored and passed another 384 bills. A member of the Energy Council since 2009, she is particularly active in addressing opportunities and challenges presented by the Eagle Ford Shale.

Senator Zaffirini pre-filed 31 bills before the 2013 session began, including many relating to higher education, public education, health and human services and public safety.

"I look forward to working with my legislative colleagues this session to pass meaningful legislation that strengthens our state's economy, prioritizes families and improves the quality of life for all Texans," she said.

Her legislative accomplishments during the 2011 legislative session include sponsoring and passing legislation prohibiting the use of dangerous restraints in State Supported Living Centers; eliminating the use of the hurtful slur "retarded" in state statutes; reforming the TEXAS Grant program to prioritize grants for high achieving, low-income students; enhancing academic advising and financial aid programs; and protecting children with food allergies.

The lieutenant governor is expected to appoint new Senate committees this month. Senator Zaffirini currently serves as Co-Chair of the Joint Legislative Oversight Committee on Higher Education Governance, Excellence and Transparency; Chair of the Senate Government Organization Committee; and a member of the Legislative Budget Board and the Senate Finance, Health and Human Services, Administration and Economic Development committees. 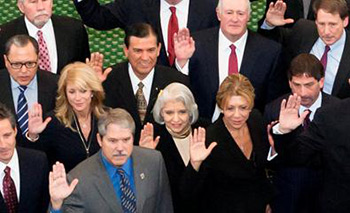 SENATOR JUDITH ZAFFIRINI (center) and other members of the Texas Senate are sworn in during ceremonies at the Texas Capitol on Tuesday. Senator Zaffirini represents Senate District 21, including all or part of 18 counties. The highest ranking Hispanic and second-highest ranking senator in Texas, she was first elected in 1986.