"Rotary's motto of 'Service above self' reflects my approach to serving in the Texas Senate," she said. "I am grateful to the Sinton Rotary Club members, including President Chip Weaver and President-Elect Patrick Flanigan, for their hospitality and for focusing on priority issues for San Patricio County and our great state."

"Thanks to its proximity to the Port of Corpus Christi and important transportation corridors, San Patricio County has the potential to attract new jobs in a variety of industries," she said. "The TPCO facility not only will create jobs, but also will help catalyze future growth."

Senator Zaffirini, who has passed 725 bills and received more than 670 awards and honors for her legislative, public service and professional work, also encouraged San Patricio County residents to send her their ideas for legislation for the legislative session that convenes on Jan. 8.

ROTARY CLUB MEMBERS from Sinton and Portland interact with Senator Judith Zaffirini at the Backstreet Café. 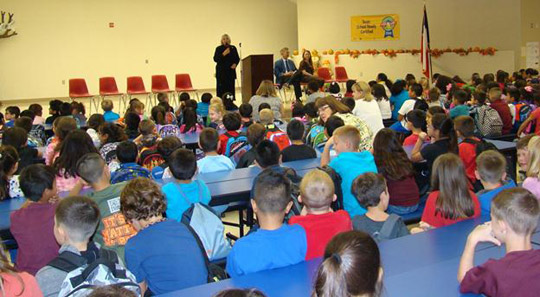