Senator Zaffirini's legendary work ethic also is reflected in her 100 percent perfect attendance in the Texas Senate since 1987, except for breaking quorum deliberately in 2003 to block an egregious, partisan redistricting plan that the U.S. Supreme Court ruled (2006) violated the Voting Rights Act and disenfranchised voters in her Senatorial District 21. Because no votes could be taken in the absence of a quorum, her 100 percent voting record remained unbroken.

"Every vote I cast in the Texas Senate reflects my commitment to balance the needs of my Senate District 21 constituents with those of our great state," Senator Zaffirini said. "I am thankful for the opportunity to make a difference, especially for the very young, the very old and persons with disabilities."

In 1997 State Legislatures magazine highlighted her 15,000th consecutive vote in an article titled, "15,000 and Still Counting: The Tireless Texan." No one responded to the magazine's request for information about similar records in any other state. When she approached 30,000 consecutive votes in 2003, The Alcalde, the official alumni magazine of The University of Texas at Austin, called her the "Cal Ripken of the Texas Legislature."

Zaffirini has been recognized routinely as one of the best and hardest-working legislators in Texas. This year, Texas Monthly named her to its list of "10 Best Legislators" for the fourth time. In 2009 the magazine noted Zaffirini's tenacity in championing the interests of her constituents: "No one works harder. No one is more organized. No one is more relentless."

"Hard work and preparation are keys to making the best policy choices," Senator Zaffirini said. "When we secure funding or pass legislation for medical education, immunization, AIDS medication, clean and plentiful water and other critical issues, we literally make life or death decisions."

The second-highest ranking member of the Texas Senate, Senator Zaffirini passed 77 bills during the 2011 legislative session, bringing her total to 725 since 1987. Her recent successes include passing bills to improve government efficiency and eliminate unnecessary spending, to enhance financial aid programs and to protect persons with disabilities.

In January Lt. Governor David Dewhurst appointed Senator Zaffirini to serve as Chair of the Senate Higher Education Committee and as a member of the Administration, Economic Development, Finance, Health and Human Services and Redistricting committees. In May he appointed her Co-Chair, with Rep. Dan Branch, R-Dallas, of the newly-created Joint Oversight Committee on Higher Education Governance, Excellence and Transparency. The senior senator for Bexar County and for the border region, Senator Zaffirini also serves on the Legislative Budget Board. 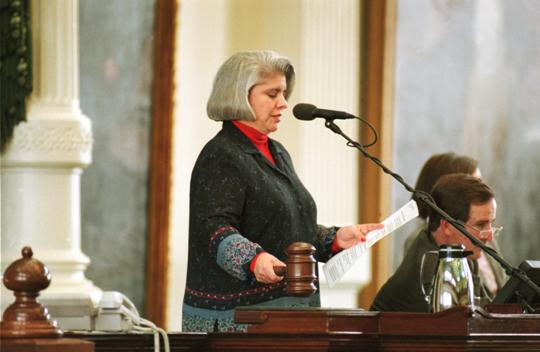 SENATOR JUDITH ZAFFIRINI, D-Laredo, presides over the Texas Senate. The second-highest ranking member, she champions legislation and funding that improve the lives of Texans, especially the very young, the very old and persons with disabilities.