(AUSTIN) — The Texas Senate on Thursday (May 5) unanimously voted to ensure that women veterans have equitable access to federal and state veterans' services and benefits.

"Texas has the second-highest population of women veterans—more than 156,000," Senator Zaffirini said. "The Texas Women Veterans Program would address their unique needs and increase the number of women who receive critical VA benefits and healthcare services."

Establishing the program would facilitate assessing the needs of women veterans and making recommendations for improvements to the Texas Veterans Commission.

"Too often, women veterans do not receive the services they need after completing their tours of duty," Senator Zaffirini said. "These brave women selflessly have put their lives at risk for our freedom, and it is our responsibility to ensure that they have the assistance they need when they return to Texas."

SB 34 was sent to the House of Representatives for consideration. The continued progress of this and all bills authored by Senator Zaffirini can be monitored via the internet at www.legis.state.tx.us or by contacting the Texas Legislative Reference Library's toll free in-state hotline, 1-877-824-7038. 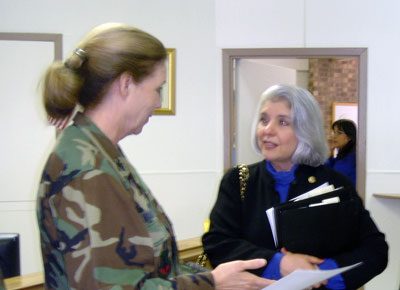 SENATOR JUDITH ZAFFIRINI, D-LAREDO, is a member of the Senate Health and Human Services Committee. Shown here with Colonel Sue Hechinger of the Texas National Guard, she champions legislation and funding for health care services for all veterans and servicemembers.