Welcome to the official website for the
Texas Senate
Senator Judith Zaffirini: District 21
« Return to the press archives for Senator Zaffirini
printer-friendly
Press Release
FOR IMMEDIATE RELEASE
May 6, 2011
Contact: Will Krueger
(512) 463-0121
SENATOR ZAFFIRINI WINS 21 AWARDS FROM PRESS WOMEN OF TEXAS

"Winning with 21 of 22 entries reflects my commitment to using a variety of media to keep my constituents informed," Senator Zaffirini said. "We communicate not only interpersonally, but also via all available news and social media. Constituents can 'friend' me on Facebook or register for my tweets. Equally important, my staff and I respond to every letter, email and telephone call." 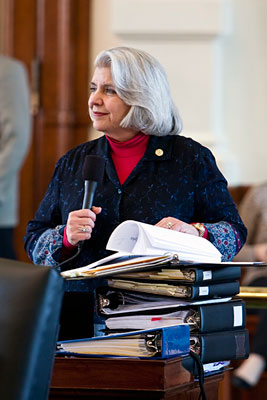 SENATOR JUDITH ZAFFIRINI, D-LAREDO, is second in seniority in the Texas Senate. A strong communicator in the legislature and in her district, Senator Zaffirini believes strongly in keeping her constituents informed.